#Review: Love in B Minor by Elodie Nowodazkij @ENowodazkij | #MustRead 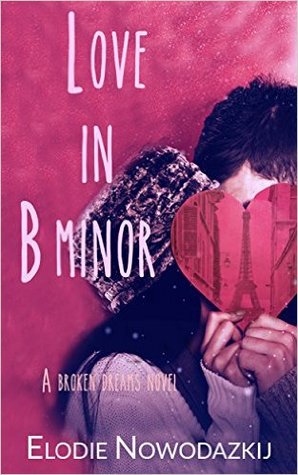 Love in B Minor
by Elodie Nowodazkij
No promises. No fake tomorrows. That was the plan. New city. New life. At least, that’s what nineteen-year-old Jen Harrison believes. On the surface, she’s living her dream: dancing in a prestigious dance company in Paris. But her sister’s death and the mistakes she’s tried to bury haunt her. She’s become a pro at hiding who she truly is, and she definitely doesn’t want a guy to derail her, but a one night-stand she can do. Nothing more. She definitely doesn’t plan to see the sexy stranger who made her laugh for the first time in years ever again. Girls don’t walk away from Lucas Wills. Bad boy turned rock star, he’s got his share of groupies. Always upfront, he doesn’t promise fake tomorrows because love can destroy everything. Been there, done that. His ex not only lied to him, she stomped on his heart, used him to become famous, and almost ruined him. So, waking up alone after a night beyond his wildest imagination with a girl he just met shouldn’t upset him, shouldn’t inspire one of the saddest songs he’s ever written, shouldn’t make him want to chase after her. When Jen, the one-night stand who got away, auditions to be a dancer in Lucas' next music video, they can’t stop their growing attraction. But Jen’s secrets and his ex could shatter the careers they tried so hard to build and their hearts…they will have to decide what’s more important and if love is worth the fight. Love in B Minor is the third standalone novel in Elodie Nowodazkij's Broken Dreams series.
Goodreads | Amazon

DISCLAIMER: I was provided with a complimentary copy of this book so I could give an honest review. Going to try and keep this short and sweet. If you feel I am being too vague, go buy the book.

Let's not get too wound up . . . Okay, strike that. We have reason to wind up! This book is amazing! Right from the beginning, we can see Jen is trying to project a strong character. We don't know the full story of her past yet, so we are trying to figure out why this young woman is in Paris in the first place. The scene: a French Bar. The troublemaker? Some drunk who gets a little too dirty, which sends Jen out of the bar for some air. Enter the mugger with a knife.

Switch the perspective a moment and we are now in the head of Lucas. Musician, songwriter, and gorgeous. He comes to Jen's rescued, but when he realizes she has no idea who he is, he gives her his middle name. Jen gives him the name Laura.

Boom! Laura is the One Night Stand Who Got Away. Want to know more? Go buy the book!

My Rating: 5 of 5 Stars.
This was such a great read. Much like another amazing book I recently reviewed, it ripped my heart out towards the end, trampled on it, and then gently knitted it back together in my chest. The book is amazing. I love the characters (especially Lucas) and I wanted to beat the life out of another character (not saying anything because I know you are about to go buy the book).
Posted by Esther Hadassah at 5/05/2016 01:24:00 PM