Book Recommendation of the Day: Splinters by Susan Bird 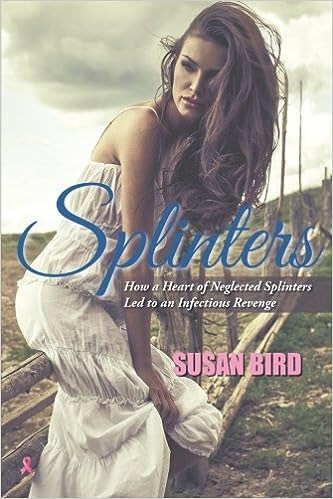 Splinters: How a Heart of Neglected Splinters Led to an Infectious Revenge

Sunday O’Neil has made peace with all of her unhinged fences. She decides to move forward and leave her broken relationship behind her and start a “new beginning”. Sunday meets Dean Daniels who is kind and moreover, has no agenda except to make her happy. Sunday is reluctant to embrace another relationship, but somehow finds herself drawn to him. Dean was not the stereotypical type of man Sunday normally was attracted to. Aside from her personal relationship failures in the past, Sunday O’Neil flourishes as a savvy business professional who owns her own employer paid employment agency. She is a dynamic head hunter! Sunday finds herself being pursued by Reinhart Preston, president of P & P Solar Industries. He is a wealthy, ruthless, undeniably handsome business man and president of P & P Solar Industries. Mr. Preston is determined by any means necessary to become the number one wholesaler of solar panels in the United States. Mr. Preston’s proposal to Sunday O’Neil was monetarily overwhelming yet unrealistic, and had a threatening overtone if not accepted. A love hate business relationship is born. Unbeknownst to Sunday there are lies and deception on woven into Mr. Preston’s business proposal.
Sunday O’Neil fi nds herself in a twisted world of business, erotic encounters, betrayal, lies and deception. Can Sunday O’Neil keep her head above water?
-Beautifully written second instalment of Susan Bird’s “Fences” trilogy. I did not expect this turbulent ending. Thoroughly enjoyable. - Dennis Koller author of “Kissed by the Snow”
-Susan Bird’s book literally played like a soundtrack in my mind. Love the idea to mix music and literature! Loved this book I could not put it down. Wow, this ending I did not see coming. - Venus Zamora…..Actress

By Venus Demilo - January 12, 2016
Once again, Susan Bird has crafted a colorful, melodic and persuasive creation with the continuation of Sunday O'Neil's apologue. Every chapter and every song seems to pull me further into the wonderful yet turbulent world of this enterprising young woman. Waiting with baited breath for the final installment to this trilogy and hoping that Sunday finally gets everything she's been working for.
Posted by Haddie at 5/19/2016 10:21:00 AM