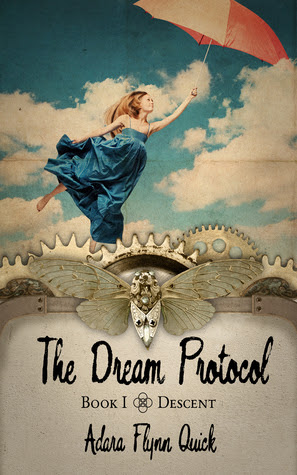 WHATEVER YOU DO, DON’T GET OLD. In fiery young Deirdre Callaghan’s home of Skellig City, no one has dreamt their own dream in over a thousand years. Dreams are produced by the Dream Makers and sold by the Ministry, the tyrannical rulers of the city. In Skellig City, years of life are awarded equally and the ruined are cast away beneath the city on their 35th birthday.
Unbeknownst to the Ministry, Deirdre’s handsome friend Flynn Brennan is afflicted with a terrible disease – a disease that accelerates the aging process. Knowing his fate if the Ministry should ever discover his illness, Flynn has lived his whole life hiding from their watchful eyes. When Flynn’s secret is finally discovered, Deirdre is determined to free him from the Ministry’s grasp. But to save him, she will have to reveal herself to a shadowy enemy…one that none of them even knew existed.

Deirdre was falling from a great height. The air was cold and her hair blew up around her like a golden veil. Ice crystals collected in her curls and they turned rigid as she fell. And then she crashed headlong into a body of ice-cold water. The freezing temperature bit into her skin like a thousand pinpricks, and her eyes flew wide open. Above her was the light of the surface, but a powerful current was sucking her down, down, down into the dark. She flailed against the downward pull, kicking with her legs and reaching with her arms. She knew that the single breath of air in her lungs wouldn’t last much longer. At the last moment, just as she felt that she might open her mouth and drink down the dark water, the riptide from below released her. She kicked for the light, but soon the true horror of the ‘Mare became clear. The surface was sealed away with a thick layer of ice and frost. There would be no air for her lungs in this underwater prison. She beat her fists against the ice to no avail; the dark water wouldn’t let go. She was drowning with the surface just out of reach.
She tried to scream a curse at the Minister, but in this ‘Mare there was only silence. No sounds at all. She sucked down the freezing water and choked, over and over. Mercifully, she passed out. In that brief moment of unconsciousness, a hundred images flickered through her mind, each one like a photograph taken with a magnesium flash bulb. Images of Roenin, Flynn, and the red oak tree kept appearing. In the back of her mind her own voice formed a question: how does Roenin know about the Dream Protocol?
On the surface of the frost, something new came into the dream, something that the ‘Mare Makers would never have sequenced. The ice started to hiss and steam. A pattern wrote itself into the ice block; the five-circle symbol of the Makers. It burst into flame, melting the ice and cold all around the Maker’s daughter. Deirdre felt her body rising out of the water. In dream, she came Awake. 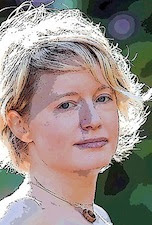 Irish-American author, Adara Flynn Quick, is the writer of The Dream Protocol series. Early in her career, Adara was fascinated by dreams, the unconscious, and the healing stories of many cultures. As a contemporary author, she writes young adult literature that brings ancient myths and legends into futuristic worlds. She is an accomplished visual artist and uses her background as a psychotherapist to inspire the finest and darkest moments of her characters.
Driven to distraction by her computer, Adara writes all of her stories longhand. Pen and paper are two of her favorite things. The author tortures her husband with a passion for downtempo electronica and too many pillows. She is a firm beleiver that there are never enough pillows.
Website / Facebook / Twitter