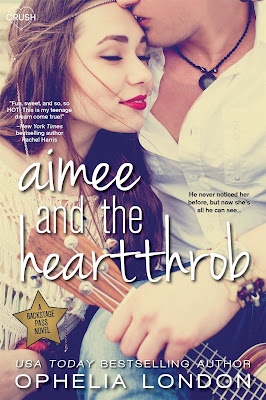 Aimee and the Heartthrob
Backstage Pass #1
by Ophelia London

He never noticed her before, but now she's all he can see...

Miles Carlisle is every teen girl's fantasy. His rugged good looks and exotic British accent have helped catapult his boy band, Seconds to Juliet, to super-stardom. But after two disastrous and very public breakups, Miles isn't interested in dating just any girl; he wants The One. And the only girl he's interested in is not only his best friend's little sister - and off-limits - but won't even give him the time of day...


As a kid, Aimee Bingham had a huge thing for Miles...until he made fun of her for always tagging along. Now that she's outgrown both him and her pigtails, the prospect of spending two weeks on tour with the childhood crush who broke her heart isn't exactly enticing. Except now Miles seems interested. Very interested. And no matter how hard Aimee tries to resist him, her crush is definitely making a comeback. But everyone knows that falling for a heartthrob is a backstage pass to heartbreak...
Goodreads | Amazon

If I could equate this book to anything, it would be my love for boy-bands. If you like The Wanted, 5sos, One Direction, Backstreet Boys (I'm old school), then this is the book for you. Follow Aimee as she is forced to tag along with her brother while he interns as part of the tech crew for Seconds to Juliet (S2J) and has to converse with the guy she knows never noticed her when they were growing up.

Miles "The Heartthrob" Carlisle. He truly lives up to that given reputation, even after having his heart torn in two . . . twice. When he first sees Aimee, he does not recognize her to be the eleven year old in pony-tails, following him around like a "puppy". Aimee did have a major crush on Miles, but her older brother, Nick, puts her in her place. Quite hurtfully, in fact. Nick tells Aimee that Miles knew about her crush on him and thought she was . . . I can't think of the right word, but I will settle for pathetic.

Also, since Nick has been Miles' best friend forever, he knows what Miles is like (or was like) and specifically tells Miles to back away from using his charm on his little sister. Of course, Miles can't help noticing Aimee to be the only girl in the room now.

Aimee might still think that Miles sees her as Nick's little, "pathetic" sister in pig-tails, but she cannot deny the flutter of her heart whenever he loses the cocky attitude and is genuinely interested in hanging out with her.