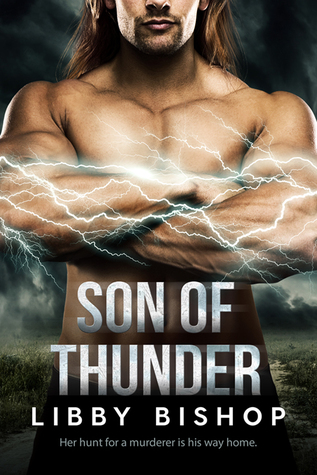 Rune is the grandson of Thor, and just as strong. Exiled to the realm of Earth for nearly killing his brother–it was a little misunderstanding– he has to find a way to redeem himself so he can get back to Asgard. And when he lands—literally—in the bed of a fiery redhead with an FBI badge, he realizes that she may be the key to going home. But helping Liv hunt a killer has one big consequence—chemistry. He can’t keep his hands off her, and there’s no way they can ever be together.

Six years ago, FBI Special Agent Liv Winter’s best friend was murdered. Since then, she’s taken a two-week vacation around the anniversary of the death to try and solve the case. She’s used every available resource. Yet, her friend’s killer is still on the loose. She refuses to give up—willing to do almost anything to bring the person to justice.

Apparently, almost anything includes trusting a god. And while she might need Rune’s help with her case, there’s no way she’ll ever trust him with her heart.
Goodreads | Amazon

DISCLAIMER: I received this book from NetGalley in exchange for honest review. This review contains affiliate links to Amazon.

Let me start this off by saying this book is better read by readers ages 18+. It is an adult romance after all.

Rune is the grandson of Thor. Need I say more?

Liv is a fighter and she works hard for justice. Her best friend was murdered, for crying out loud. No one should have to experience finding their best friend so brutally murdered.

I think the first best part is when Rune steps through the Gate after receiving his punishment from Odin, and he lands in Liv's cabin. Basically right on top of her. What happens when you mix two head-strong characters in the same room? They try to out-do each other.

After Liv agrees to let Rune help find her friend's killer, Liv says she will allow him to stay with her until the case is solved. Liv knows quite a bit about Vikings and Norse legends. That part pretty cool. Rune makes a statement that he can make food better than most people can. If he was able to seduce Liv's taste-buds, he would get to share the bed with her. If not, he sleeps on the couch. Where does he end up?

Rune figures out that Liv's friend's murderer is a god-kin, most likely related to his brother. As it turns out, Rune has been sent to Earth because he beat up his brother for murdering his friend. Very similar situation to Liv. Which allows us to understand why he wants to help.

My Rating: 4.5 of 5 Stars.
The special tension that builds between the two characters is a strong push through the story, but not overwhelming that it makes the book erotica. The mystery and thrill, the suspense. This book is fantastic. I would say this book is good for any one who likes viking history and the Thor comics, with a LARGE dash of steamy romance.