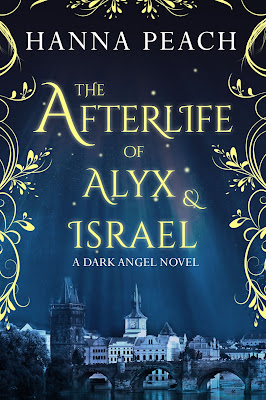 The Afterlife of Alyx and Israel
(Dark Angel, #6)
by Hanna Peach


Once upon a lifetime, Alyx & Israel lost each other...
In their new mortal lives, Alyx & Israel don't remember anything about their past. And they have never crossed paths. Until some old friends decide to secretly nudge destiny along, their efforts almost destroying everything…
Now Alyx’s life lies in the balance, trapped in a coma deep within a DreamScape maze city. The only one who can help her escape is Israel, a man she doesn't remember. They need to find a mysterious Mapmaker and solve his riddle. But is this Mapmaker hiding something?
Although this book is set years after the Dark Angel saga, it can be read as a standalone.
Amazon.us | Amazon.uk | Amazon.ca | Amazon.au | iBooks | Smashwords | B&N | Kobo Afterlife can be read as a standalone BUT you can grab the Dark Angel's series now! Start it FREEOR Get caught up iBooks / B&N Smashwords / Kobo Amazon.us / Amazon.ukAmazon.ca / Amazon.au
DISCLAIMER: I received a review copy of this book in exchange for honest review. This is definitely so worth your time! Any quotes from the book(s) are solely reference for the purpose of this review and not by any means used with disrespect. Yes, this review contains spoilers, but hopefully it will be fun to read.
Oh my goodness! This was so amazing! First of all: Even though this can be read as a stand-alone novel, as a personal choice, I read through the first Dark Angel novel (as it turned out, I happen to own a copy of the first book in the series, and I don't remember when I bought it) to become familiar with who the characters were (are) before bouncing into their afterlife.
Alyx is getting married. You know . . .

" . . . the mortal tradition where a woman lies about being a virgin by wearing a white dress, the couple then lie to each other by agreeing to a list of promises read out to them by a guy dressed in a robe, sometimes wearing a funny hat, and swap round circles of metal that they wear on a finger."

Well said, Balthazar. However, there is one problem with that detail, although she does not know it at the time. This man Alyx is going to marry . . . he is not her soul-mate. Her kindred spirit. Her other half. No, no, no! Anyone familiar with the series knows she is meant to be with a certain, handsome bad-boy-mortal. Alyx chose to be mortal. Nothing wrong with that, but come on! If I were in her place, and I did not sense that my heart was truly in it, I would cut it off and wait for the real thing to come around.
Okay, on the other side of the city, sitting on a bar stool, is the amazing Israel. No, not the country. He's all man. He does not remember this, but in his past-life he was a thief. In this life, he is, or was, a cop. (IDK about you, but something about a man, and former uniform, gets me weak in the knees.)
Enter Balthazar, Vix and Jordan. These are the friends of Alyx (and possibly Israel, if I recall correctly), though she will not remember them until later, after they reveal themselves. They KNOW Alyx is not meant to marry this guy in the suit. No, she's too bad-ass (mentally in this life) to be tied to someone so boring (no offense intended here, because I do love me a man in a suit!)! Back to the main point. Vix has a plan on how to get Alyx and Israel to meet, but there are consequences to those who interfere with Fate. Not that I blame Vix for wanting to step in, but sometimes patience does have its rewards.
Fate's consequence for the interference is knocking Alyx in the head with a stone gargoyle in a cathedral, right after meeting Israel for the first time (in this life). Of course, there is unexplainable attraction between them, though Israel has opened up to it a bit more than Alyx has (possibly because in her head she is engaged). Alyx and Israel have constant thoughts, actually they are flashbacks of former lives.
Alyx is in a coma, and is running out of time. If she does not wake up, she must pass on. Israel learns this and deep down he knows that he does not want to lose Alyx. He does not know why, but he knows he will not live with a second guilt. (We later learn what guilt that is, but worry not, because it is from the current life.)
Battles and memories; feelings aroused, or rekindled (if you will). This book has a lot to share and could recommend itself. Hanna Peach does an incredible job grabbing and holding your attention. Does it have a HEA? You would have to read to find out for yourself.