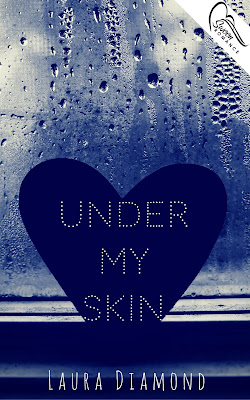 Bookish Brit Adam Gibson is one wonky heartbeat away from a fatal arrhythmia. But staying alive requires Adam to become keenly focused on both his pulse and the many different daily medications he must take in exactly the right dosages. Adam's torn between wanting to live and knowing that someone else must die in order for him to do so. He needs a new heart.
The pressure is getting to him. Adam stops talking to his friends back home, refuses to meet kids at his new school, and shuts his parents out entirely. His days are spent wondering if can cope with having a dead man's heart beating inside his chest, or if he should surrender to the thoughts of suicide swirling around in his head.
And then a donor is found…
Outspoken artist Darby Fox rarely lets anything stand in her way of achieving her goals . Whether it’s painting, ignoring her homework (dyslexia makes a mess out of words anyway), kissing a hot boy she doesn't even know, or taking the head cheerleader down a peg , no one has ever accused Darby of being a shy. She also happens to be the twin sister to a perfect brother with good looks, good grades, manners, and the approval of their parents - something Darby has never had.


Darby's always had bad timing . She picks the worst time to argue with her brother Daniel. In a car with bald tires, on an icy road in the freezing cold, the unthinkable happens. In a split-second, everything changes forever.

DARBY:
I force myself to take my time over to the plastic utensil dispenser, but I let myself rush—a little—back to the table. And Adam.“Here.” I offer him a spoon.
Our fingers brush against each other. My skin tingles from the contact.
“Thank you.” He stares up at me. The light above him catches his eyes. They’re a color I’ve never seen before, a mixture of blue, green, and brown. Didn’t look that way yesterday. Chameleon eyes. Beautiful.
I sit, trying to settle the somersaults in my stomach. A simple idea hits me: Paint them.
Guilt stomps it out. How can I think about picking up a paintbrush when my brother is dead? He’ll never shoot a basketball again, or drive his precious car, or get the sports scholarship Dad’s been rooting for. I don’t have a right to enjoy anything if he can’t.
“You all right?” Adam asks.I chew on the spoon. “Y-yeah…Hey, you wear contacts?”“No. Why?” The lean muscles in his forearms ripple and the tendons in his hands work as he fiddles with the ice cream container.I sort out the color combinations I’d have to mix to get just the right shades to match his irises. I can almost feel my fingertips sliding across a blank canvas, reading it, urging it to tell me its story. My fingers twitch, aching to hold a brush again. Can I?

DISCLAIMER: I received an e-ARC of this book, from Swoon Romance, in exchange for an honest review. You are forewarned that this review will contain spoilers. I cannot keep the juicy details in anymore!

Under My Skin starts with a bit of a touchy subject, following the main character, Adam, as we take a small trip into his head and his feelings about his heart condition. He has a few episodes where his heart fails, which definitely makes the plot believable. Adam is on a waiting list for a donated heart. Of course, for a heart to be available, someone has to die. Adam is a bit conflicted in this area, almost to the extent that you, as a reader, wonder if he wants to keep living or not. Enter the nutty psychiatrist, Dr. Shaw. Adam is not very keen on her "methods". I would totally agree with him, because Dr. Shaw was giving Adam some kind of med that has a side-affect of causing heart failure. WTH! Adam already has an unstable heart! Do you want him worse?! Adam does have a slight heart failure one day at school, but Adam's mother (and Dr. Shaw) blame it on the elevator not working. This causes Adam to be placed in ICU, and classified as top priority for a donor. Which does come a few days after Adam is admitted.

Darby is dyslexic! I was relating to her so much, every time she went to "read". Granted, her condition is more intense than mine, but I loved that I could understand how she was feeling. Also, she's and artist, and Adam's eyes inspire her. Darby is kind of close to her twin brother, but they do have their differences now and then. Darby also sees her brother as the 'perfect son' in her parents eyes, mainly because she keeps getting into unwanted trouble. Evidently, right after having a strong discussion with her brother on the subject, Darby survives an accident. Yes, her brother dies, and he becomes the donor for Adam.

As Adam wakes up (either during or after) surgery, he hears a girl crying and wailing. What comes to his mind is "I wonder who that is . . ." Darby, on the other hand, is told by none other than Dr. Shaw, that her brother's organs were donated to patients in need. Dr. Shaw also makes a promise that she will reveal the name of the patient who received Darby's brother's heart.

Adam and Darby have a brief meeting while in physical therapy. Adam has to exercise everyday, a lot, to get his body and heart acquainted, to avoid one rejecting the other. Of course, they hit it off, but Adam does not elaborate on his heart surgery to Darby. She knows he had the surgery, but that is all. However, later, Dr. Shaw does tell Darby who Adam is. This makes Darby not like him anymore, even though they'd only had a few encounters. Very NICE encounters I might add.

My Rating: 5 of 5 Stars.
People, I cannot even begin to express and describe how amazing this book is! I cried so much, but in a good way. Adam's condition had me reeling. Darby being misunderstood hit home. The romance that builds. The impact of the final chapter definitely took it's toll on me. All in all, such an amazing read. I had to take a week to write my review because my own heart was reeling and I almost felt like it would have its own kind of failure. I have not done any visuals in my reviews for a while, so I am pleased to welcome back Mr. Sexy Blue Eyes, improved with a double-lip ring. Just imagine him as a seventeen year old. 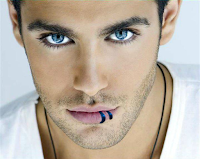 I may not be big on lip rings, but if Adam were real, I would want to be kissing him too!


UNDER MY SKIN: Getting To Know You, Darby FoxUNDER MY SKIN has two main characters, Adam Gibson and Darby Fox. Darby is an artist. She sees the contrast in life and likes to capture it on her canvas. There is beauty where two opposites collide.
Darby tends to act on instinct. If she sees a hot guy on the dance floor, she’ll shimmy up to him. If a stuck-up cheerleader decides to pick on her, she’ll call chick out for it. If she gets in trouble with her parents for TP-ing a teacher’s house (that one time!) to prove a point, it is totally worth it.
If she’s flunking her classes because no matter how hard she tries to wrangle letters and words into something that makes sense to her dyslexic mind, then so be it. If her perfect, All-Star basketball player, straight-A report card wielding, classic car rebuilding twin brother refuses to have her back, well, she’ll yap at him until he sees her side. And she won’t feel bad about laying on a guilt trip either.
Problem is, the guilt trip turns into an argument on an icy road at night after a basketball game. Add four bald tires, a steep hill, and an oncoming semi, and Darby’s got one heck of a problem staring her down.
In an instant, everything changes.

About the Author
Laura Diamond is a board certified psychiatrist currently specializing in emergency psychiatry. She is also an author of all things young adult—both contemporary and paranormal. An avid fan of sci-fi, fantasy, and anything magical, she thrives on quirk, her lucid dreams, and coffee. When she’s not working or writing, she can be found sniffing books and drinking a latte at the bookstore or at home pondering renovations on her 225 year old fixer upper, all while obeying her feline overlords, of course.