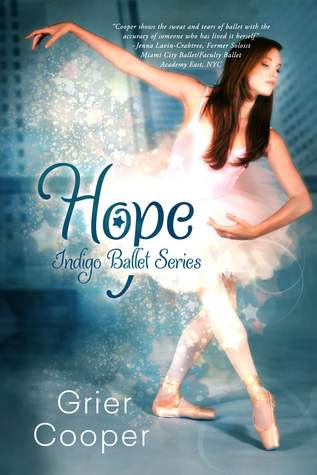 
Indigo is living the life she’s always imagined at the famed New York School of Ballet. Or is she? Although she hopes she’ll be chosen for the company, her ballet teachers aren’t talking and their silence is confusing.
When Indigo is singled out for a coveted solo she feels her dreams are finally within reach, until she finds out she’s dancing with Felipe Gonzalez, the school’s smolderingly hot rising star. In the days that follow, Indigo questions everything she thought was true and finds herself making surprising choices.
After a fateful piece of paper reveals the truth, Indigo must ask herself the hardest question of all: can she take control of her own future to create the life she wants?

—
EXCERPT:
Maggie plunks her bag down, grabbing the spot next to me. “Ten minutes ‘til the fun begins,” she says. She glances around furtively before adding, “Who knows what torture she’ll dish out today. But inquiring minds want to know: will she reach new levels of cattiness or will we be left sorely disappointed?” She grins wickedly as she finishes tying a ribbon on her pointe shoe.
Neither of us fares well when Alexa Damore teaches class. She’s known for her snide comments and keen ability to pick people apart. “I’ll take disappointment over outright humiliation any day,” I counter. “But who knows. Maybe one of these days she’ll be miraculously transformed.”
Maggie arches an eyebrow. “What?” I continue. “It’s not too much to hope for–a little prayer can’t hurt. Pray with me. ” I fold my hands together and duck my head down. Maggie smacks me.I stick my tongue out at her while I finish tying my shoes. I refuse to climb on the negativity train with her. It’s never a good way to start class.
The door to the studio glides open and a sudden hush sweeps through the room, as if the oxygen has been sucked away. Alexa Damore has arrived–but she’s wearing street clothes–and she’s not alone.
Benjamin Stafford, Artistic Director of Manhattan Ballet Theater, also known as the man who holds our future in his hands, stands in the center of the room. From where I stand, the ambient light behind him illuminates the outline of his body, as if he’s a living embodiment of a god. Then again, he is a god in the world of ballet. The silence is deafening as he slowly rotates around, gazing at each of us in turn. He flashes a brilliant smile and it’s all I can barely look at him. He’s even larger in life than he is onstage with broad shoulders, chiseled features, dark, tousled hair, and blazing blue eyes. On any given day he’s something to look at, but the glowing outline thing further illustrates the glaring difference between him and everyone else in the room.
His eyes fall on me and my heart flutters in my ribcage. I immediately stand a little bit taller and suck in my gut. My breath gets shallower and tighter. I close my eyes and force myself to breath normally. Passing out in class is not the way I want to make an impression.
I may not survive this class.

Author Bio:
Grier began ballet lessons at age five and left home at fourteen to study at the School of American Ballet in New York. She has performed on three out of seven continents with companies such as San Francisco Ballet, Miami City Ballet, and Pacific Northwest Ballet, totaling more than thirty years of experience as a dancer, teacher and performer.
Her work has been praised as “poignant and honest” with “emotional hooks that penetrate deeply.” She writes and blogs about dance in the San Francisco Bay Area and has interviewed and photographed a diverse collection dancers and performers including Clive Owen, Nicole Kidman, Glen Allen Sims and Jessica Sutta. She is the author of Build a Ballerina Body and The Daily Book of Photography.