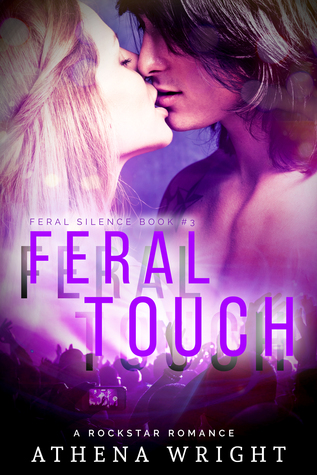 It's been five years. Is he still the boy I fell in love with, or are the rumors true? After all, everyone knows rock stars don't date nice girls. Rock stars use nice girls.

His back was to me, tall with long black hair falling over his shoulders. He signed autographs and took selfies. I wanted to shout and get his attention. I didn’t even know his name.

He turned around. I saw his face up close for the first time. Time stopped. My limbs trembled, going weak. I was seeing a ghost. A ghost of the boy I'd grown up with. The boy I'd fallen in love with. The boy I'd long thought dead.

Then dark eyes met mine as Ren spoke my name and I fell for him all over again.

Now he says he wants me in his life. I want to believe him, but five years is a long time. Ren's changed. I've changed. He refuses to speak about the past. He won't tell me why he ran off and disappeared. Is he still the boy I fell in love with? Or are the rumors true?

After all, everyone knows rock stars don't date nice girls.

Feral Touch is a sexy rockstar romance. It is the third novel in the Feral Silence series, but can be read as a standalone with a HEA.

Athena is giving away a free ebook!
Want to know how the rock band Feral Silence came to be? Athena wrote an EXCLUSIVE prequel available only to newsletter subscribers. Stay up to date with new releases AND receive Feral Dream: a Feral Silence Prequel, when you sign up for Athena's mailing list: http://athenawright.com/free-feral-silence-ebook

DISCLAIMER: I received a copy of this book in exchange for a review.  Also, how cool is the author's name!

Feral Touch might be the third book in the series, but that does not make it any less awesome! First off, take a moment to look at the cover. Friggin' . . . yeah, let's stick to the review. Like the description implies, this book follows cellist, Ivy. She is practically dragged to a concert with her two friends. Ivy is not a fan of the band, but there one song that she loves, because of the violin solo. When the concert ends, of course, Ivy's friends want to have a chance to meet the band, and they drag Ivy along. Ivy is not into the fangirl thing, but she does want to at least see the sexy bass player-slash-violin soloist from her new favorite song. The description is a major spoiler in itself.
Sparks fly; feelings aroused . . . fill in the blanks.

My Rating: 100 of 5 Stars.
I was reading this while I was out. Ohmigosh! That Ren is a sexy beast *swoons* Got me hooked from the first page. The story was captivating. The romance was steamy and I could not put it down. I loved Ivy's character. I loved that she knew Ren before. I love her friends; I would be right along with them, fascinating about the band I am now obsessed with. Feral Silence all the way! Author's writing was well executed. Build up to where Ivy and Ren get things on, or rather, get things off . . . Most of the time, when I come to stuff like that in a book, I will gently skim through it. Not this time. I read every detail and loved it.

About the Author
Athena Wright is an author of New Adult Romance, with a focus on bad boys and rock stars. She loves to write characters who are not always what they seem.
Want a free taste of Athena's writing? You can receive two EXCLUSIVE Newsletter-Only side stories for FREE. Just subscribe and tell Athena where to send them. You'll also be notified of new book releases.http://eepurl.com/bAnwdH