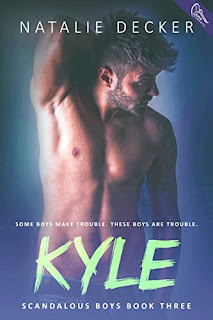 KYLE
Natalie Decker
NA Romance
Kyle Issac is a player in the biggest of ways. He’s not into relationships. Fun is all he wants, but one night with his sister’s best friend changed him in ways he can’t explain. Maybe because she was the only girl who turned him on and then shot him down. Maybe because she’s off limits in a way that has him wanting more of her. He’s not sure but something definitely changed and now he’s looking for another chance to even the scoreboard. He’s got one summer to do it.


Emily Emerson is not a relationship type girl like her best friend Madison Issac. However after her newest fling gone wrong, she’s starting to realize the fun carefree way Em is lost. Maybe a relationship is the kind of thing she needs to get herself out of this funk. But Kyle Issac, her forever crush is not going to be it. The longest he’s dated a girl was a weekend tops. How can she find someone though if Kyle is always there butting in? So, she turned him down three times, she figured he’d get over it and move on. Apparently not.

With wants and doubts confusing her, one question remains: Does Kyle really want her or is she just another game for him to win?

Author Bio
Natalie Decker is the author of the bestselling YA series RIVAL LOVE and NA Scandalous Boys Series. She loves oceans, sunsets, sand between her toes, and carefree days. Her imagination is always going, which some find odd. But she believes in seeing the world in a different light at all times. Avid reader of everything. She’s a huge Denver Broncos fan, loves football, and fuzzy blankets. She’s a mean cook in the kitchen, loves her family and friends and misses her awesome dog infinity times infinity. If she’s not writing, reading, traveling, hanging out with her family and friends, then she’s off having an adventure. Because Natalie believes in a saying: Your life is your own journey, so make it amazing!