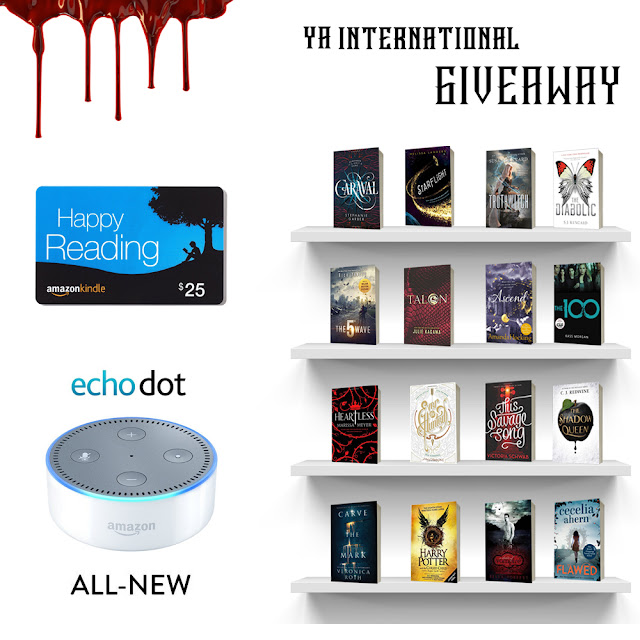 During the blitz, readers will find out about the authors, their books and their amazing international giveaway. Four winners will receive a selection of best selling paperbacks, hard cover editions and the all new Amazon Echo Dot!
International giveaway is open to US, Canada, The United Kingdom and Australia

Melissa A. Craven
Emerge: The Awakening
Allie has always believed life is simple.
You’re born. You live. You die.
But she's about to learn those rules don't apply to her. For years, she has suffered as those around her avoid her at all costs, too intimidated to get to know her. It's left Allie feeling like an outcast for fifteen years.
When an unexpected move brings Aidan McBrien crashing into her life, he doesn’t shrink from her touch. With Aidan, she will discover what true equality means and she'll finally have a friendship unlike any she's ever known.

Karen Tomlinson:
A Bond of Venom and Magic
Magic awakens. Darkness stirs. The Wraith Lord is hunting.
For Diamond Gillon the war raging in the South seems a remote danger, until her home is brutally attacked. Catapulted into a terrifying new world in which legendary beasts arise, magic is condemned and half-blood fae have no rights, Diamond is drawn ever closer to her saviour, Commander Hugo Casimir. But Hugo is a heartless killer, owned by the cruel immortal fae queen; a queen who will murder her own people for magic...

Sarah K. Wilson:
The Ex-Pacifist
Vera and her bodyguard, Roman, are connected by the computers in their heads and can silently coordinate. The downside? They’re on an impossible mission set by a vengeful emperor who would prefer to see them both dead. Not many sixteen-year-olds have to fight an entire empire for survival – and not many would be so good at it.

Norma Hinkens
Girl of Fire
A smoking hot new science fiction tale of dark dealings and treachery in space. In a high-stakes story of shocking secrets, a gutsy heroine with grit and personality takes on the seedy Galactic underworld of cutthroat body poachers and double-crossing space pirates!

Kelly St. Clare
Fantasy of Frost
The veil I've worn from birth carries with it a terrible loneliness; a suppression I cannot imagine ever being free of.

Sometimes it takes the world bringing you to your knees to find that spark you thought forever lost.

Sometimes it takes death to show you how to live.

Heather Hamilton-Senter
To Make a Witch
Being the good girl doesn’t always pay off.
Lacey McInnis is hoping to make a fresh start in New Orleans—she’s also hoping to forget she almost became a powerful witch, and that she almost sold her soul to do it. But when the tomb of the Voodoo queen Marie Laveau is desecrated, and then a gruesome murder is committed in the very heart of Westover Academy, Lacey will need to decide if she's ready to become the witch she was always meant to be.

Anna Santos
Save Me
Jacob is a gargoyle with a curse, waiting for decades for his soul-mate. When he saves a beautiful werewolf girl from near death, he finds the one he’s been looking for. But true love comes with a price and, in Jacob’s case, it can cost him his very own existence.

Erin Hayes
How to be a Mermaid
All Tara ever wanted was to be a mermaid. So she takes a year off between high school and college to don a fake tail and tour aquariums across the country in a professional mermaid troupe. Everything's great until she meets a gorgeous real-life merman named Finn. Suddenly, what she thought was a dream turns out to be a nightmare -- she's turning into a real mermaid herself.

Nicole Cassidy is a witch descended from the Greek gods... but she doesn't know it until she moves to a new town and discovers a dangerous world of magic and monsters that she never knew existed.

"Harry Potter meets Percy Jackson with an added twist of teenage angst, hormones, and uncertainty... I am officially HOOKED!"

Siobhan Davis:
Saven Deception
In a futuristic undersea city, Sadie falls hard for captivating Logan — only to discover that he comes from another world! Action, romance and intrigue combine in this addictive page-turner. "The X-Files meets Twilight and blows them both away!"

True Calling:
For Ariana Skyee, Planet Novo was everything it promised to be until the authorities introduced "The Calling" as their response to repopulation. Now, all seventeen-year-olds are to participate in this Bachelor-style pageant to find their perfect match, marry, and have children. "Fans of Matched and The Selection will really love this book ... it's amazing!"

Swords & Stilettos
17-year old Zoe needs to devise a kick-ass plan to save the world ASAP. Otherwise, Armageddon starts the day she turns eighteen—and if that happens, everything is going to hell. Literally.

"Swords & Stilettos; an absolute winner. Could not put it down!"

Michelle Bryan:
Strain of Resistance
Bixby and her crew of survivors lost everything on the day the world was invaded by the alien predators. Their homes. Their families. Everything they held dear. No more. This is the story of their resistance.

Severed Wings
Luciana dreams of being normal. In reality what she is, is far from normal. But feeling other people’s pains does that to a girl. That is until she meets the one man that makes it all go away. Now, Luciana must decide if she should trust her feelings and believe in the man from her dreams who says he’s a Soul Collector and she was the girl he refused to collect. 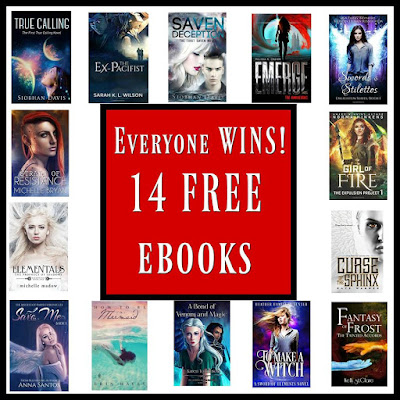