Landing a photo shoot with a hot lingerie model is every guy’s fantasy. And that includes Evan Mayfield. He expects nothing more than an interesting gig and a quick paycheck, but once the photographer starts snapping pictures, Evan realizes the job is going to be a lot harder than he thought. The sexy brunette with whom he’s posing is beautiful, intriguing, and a first-class ice princess. He should take the money and run, but he never could resist a good challenge.
Francesca Jones has sworn off men, which has given her time to focus on entrepreneurship. After settling down in the sleepy town of Creekview, she started her own lingerie business. Now she’s ready for the next step—launch an online shop for her designs, including a new line for men. But the fitness model she hired is making it difficult to concentrate with his warm hands and his penetrating gaze, and the last thing she wants is for him to discover that her life in Tennessee is nothing more than a façade.
Despite her efforts to keep him at bay, he melts her defenses, and after a night of seduction, she finds herself torn between keeping her secret and revealing the truth. Either way she goes, the consequences could be devastating.
SEDUCED is the fifth book in the WHISKEY NIGHTS series. Since each book focuses on a different couple, they can be read as stand-alones; however, since there are recurring characters, many readers may prefer to read the series in order for maximum enjoyment. 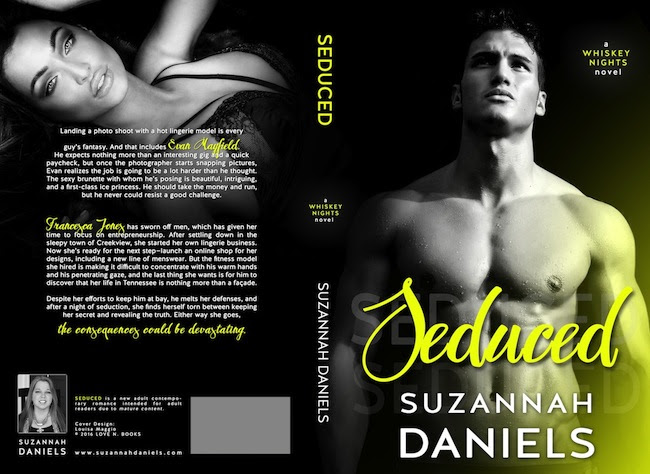 About the Author
Suzannah Daniels has had an affinity for words for as long as she can remember. She grew up in North Georgia with four brothers, so she learned at an early age to admire snakes and motorcycles. When she wasn't pestering her brothers, she could usually be found reading or writing.
She is the author of the Whiskey Nights series (new adult contemporary romance), the Dangerous Trilogy (young adult contemporary romance), Vampire's Bane (young adult paranormal), Ghostly Encounter (young adult paranormal romance), and Viking's Embrace (historical romance).
Currently, she lives in Chattanooga, Tennessee with her husband of twenty-nine years. Her children live nearby. The family pets include a Lab mix named Achilles, a Basset Hound named Annabelle, and a Shih Tzu named MooMoo.
Visit her website at www.SuzannahDaniels.com.