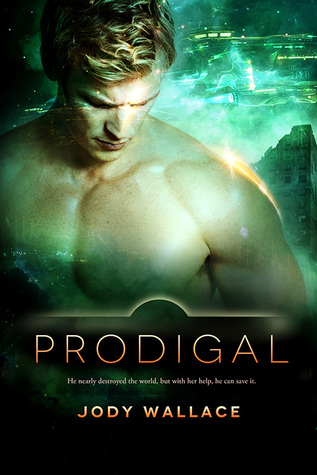 
He nearly destroyed the world, but with her help, he can save it.

Adam Alsing—at least that’s what they tell him his name is—has no idea who he is or why he’s huddled naked in the snow next to a mysterious silver pod. When a gorgeous, no-nonsense sheriff by the name of Claire Lawson rescues him, she explains the planet’s under attack—and he’s been missing for over two years. The problem is, what he doesn’t remember can kill them.

Keeping the peace in her post-apocalyptic town is all the trouble Sheriff Claire Lawson can handle. Until the MIA Chosen One—the guy who could have prevented the apocalypse—interrupts her supply run. The Shipborn aliens want to study him, and what’s left of the Terran government wants to lock him up. But his charming demeanor and his desire to help, along with his sexy smile, has Claire fighting her better judgment to keep Adam around. For now.
Goodreads | Amazon
The Maelstrom Chronicles:

DISCLAIMER: I received an e-Galley of this book (via NetGalley) in exchange for honest review. I think this book can be read as a stand-alone, seeing the first two books follow different main characters. However, it is better to read the books prior, so you know about other characters (even though I didn't).

Adam Alsing has been known to be dead for the last two years, or so people thought. He was the Chosen One. He was meant to save the world, but he failed. But now, he has just been found. Yeah, Prodigal. It's the perfect title.

I love Claire Lawson's character. She's badass, a sheriff, and feisty. And then Adam is very sweet, if not naive . . . to an extent. What starts out as a "safe" encounter, becomes quite a turn around. Also, Claire and Adam have the hots for each other, but Claire is not willing to admit it for a while.

There's action, there romance (its very steamy), there's conflict. It's got it all.

My Rating: 5 of 5 Stars.
I am not going to go into full detail, because spoilers. What I am going to do is share a couple visuals, because from the moment I started reading, this is who I saw as some of the characters.

Adam is - how did Tracey put it? - a pretty boy. Too pretty. If he were real, I could definitely see Sam Claflin. He's tall, dark sandy-ish colored hair. And those eyes! However could Claire resist him? I certainly couldn't . . . wouldn't.