Love is an addiction. And its name is Scott Melt-Your-Panties Meyers.
For twenty-five-year-old Amy Miles, moving into her craptastic new apartment was like winning the lottery.
Here, she could start over.
No more nightmares. No more drama. No constantly looking over her shoulder, waiting for the boogeyman to strike.
No, she was done with all that. She was going to be a normal girl, dammit.
Then Scott Meyers saunters into her life.
She knows she should stay away from her hot-as-sin apartment building manager. Shouldn’t put her heart out there, or get into another hot, romantic mess.
Two years of heartache, a helluva lot of tequila, and buried regrets should have been enough to make her call it quits on passion.
Except, Amy knows the moment she lays eyes on Scott, she’s not going to be able to run away from the undeniable attraction between them. They’re both damaged goods—and there’s a saying that darkness calls to darkness.
But some ghosts won’t be laid to rest.
When a stalker from Amy’s past returns, hell-bent on ending her life, she realizes happily ever after with Scott is just a dream. For his safety, she should walk out the door and never look back. It’s what the old Amy would have done—run like hell. Away from her past, away from inevitable heartbreak.
Except this time, she’s tired of running.
She’s ready to fight—even if it kills her.

“Why Gentlemen Are Sexy” – by Lola Taylor
Reading romance is like going on a first date every time you open your next book. As you read you’re getting to know the hero, falling in love with him page by page. Some romances are sweeter than others. Some are bittersweet. Some are hotter than hell and steam up the screen of your ereader. And all of that’s fabulous and makes you excited to read more romance.
So you pick up another book off your gigantic TBR romance pile, eagerly gearing up for your next first date… only to discover about fifty pages in that your prince is more like a toad.
Or, more accurately, an asshole.
Symptoms of a First-Class Jerk
I see it all the time in hotter romance. The hero is, well, kind of a tool. He doesn’t hold the door open for you. He’s demanding with little compassion. He demeans or humiliates you. He’s possessive because “he just has problems and a helluva lot of baggage, baby.” But don’t worry, he’ll work on that. (Never.)
He thinks he’s all that. He thinks you’ll stick around because hey, what other options do you have? And who could compete with him anyway? He’s just that awesome (and full of crap).
What he doesn’t realize is that gentlemen are sexier.
I like heroes who treat their women with respect. Who make the heroine feel pretty when she’s just rolled out of bed, who bring her breakfast in bed—preferably after a hot round of “let me show you how much I love you.”
I like heroes who are there for their women no matter what, through the good and the bad. Heroes who would never put the heroine down or make her feel bad about herself. Heroes who encourage the heroine to be independent and bring out the best in her.
I like heroes who are tough as nails without being crazy or possessive. An alpha male who knows how to be a teddy bear around his woman, and who treats her like a queen.
I like reading and writing about gentlemen.
Because, in my opinion, nothing is sexier on a man than confidence—and adoration and respect for his queen.
***
Who’s your favorite swoon-worthy hero? Be sure to mention what series/book he’s from so the rest of us can fall in love with him, too.


“Lola Taylor” is a pen name created for the romances I can’t show my grandma without blushing. My favorite genre to write is romantic suspense, usually involving hot werewolves, warlocks, or any other type of paranormal creature. Keep the action hot and the romance hotter—that’s my motto! I’m a horror film junkie, I still love Halloween as an adult (seriously, I think I get more excited for it than some kids do), and what precious spare time I have is spent with my family, reading (everything from sci fi to middle grade), playing the flute, painting pretty pictures, or screwing around on Pinterest or Etsy. Hailing from the South, I currently live in the Midwest with five fur babies and my hubby.
You can connect with me on Facebook, Google +, Pinterest, Goodreads, or my email (lolawritespnr@gmail.com). Learn more about me and my books at www.lolataylorbooks.com, and sign up for new release notifications via my free New Release Newsletter. 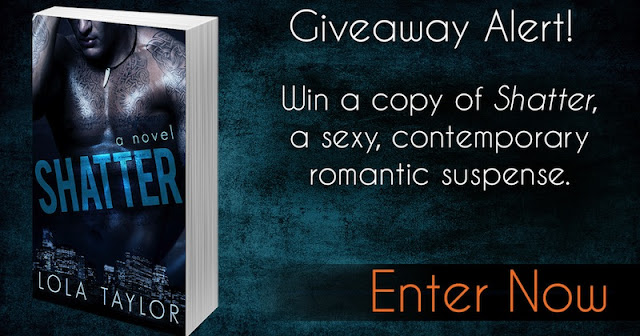