#Review: French Fries with a Side of Guys by Rebekah L. Purdy | #Giveaway @RebekahLPurdy @SwoonRomance 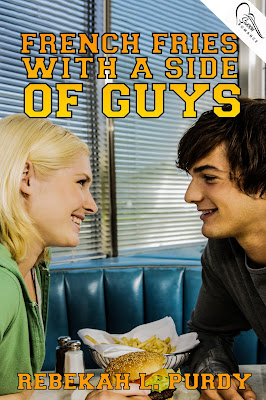 French Fries
with a Side of Guys
Rebekah L. Purdy
Genre: YA Romance

Payton Carter is one of six kids (all of which are named after famous football players), not to mention the only girl in the Carter household. With this much testosterone and no mother, it’s no wonder she’s
absolutely clueless when it comes to makeup, dances, and talking to guys she’s crushing on. And now she’s about ready to start her freshman year of high school, which is nerve wrenching enough, but when she ends up running into her crush, Chance Montgomery, at her dad’s sports restaurant, she finds out that the quarterback for their rival team is moving to Aller Falls. This is nothing short of fate.

Payton realizes she has to find a way to impress Chance and get him to ask her out or at least know she’s interested in him—preferably without dropping a plateful of fries on his head, like she did last time. After taking her two oldest brothers’ advice, she decides to go out for the freshman football team, figuring that between practices and games she and her crush will surely be able to talk. And maybe talking will lead to something more permanent or at least to a first kiss. Only this plan backfires in ways she never imagined, when she beats Chance Montgomery out of the starting quarterback position. Now not only does she make him the laughing stock of the team, but also has to figure out how to avoid the snotty cheerleaders, a traitor best friend, not to mention winning games for her team. Too bad this is just the beginning of her freshman year.
Goodreads | Amazon

DISCLAIMER: I received a copy of this book in exchange for honest review. I shall try to refrain from giving spoilers.

Firstly, the title. It's super cute. Upon first seeing it, my interest was intrigued. The first pages had me smiling because Payton tries to avoid pushing and shoving matches at the front door with her siblings. I am in that situation all the time! Payton is a bit of a tom-boy at first. Obvious character traits any girl might inherit from hanging out with her older brothers. Bad thing? Nah! Oh, except for the fact that having so many brothers makes it hard for guys to come knocking on her door when they like her.

I love how Payton's brothers were constantly trying to get her to tryout for the football team. What is amazing is that she beats out most of the "better players" and scores the QB position. And yes, she beats out Chance Montgomery for the spot, the very guy she dropped fries on. And the title definitely lives up to the book's plot. Payton is the 'guys' gal'. She gets along with all of them and they count her as one of them. I guess that is why I like this book so much. I relate to Payton so much.

My Rating: 5 of 5 Stars.
The author had a way of making you, as the reader, fall in love with all the guy characters. Chance, Jake, Neal and Matt. Payton's older brothers. I got really worked up when I finished because I was not ready for it to end. And . . . I am just speculating, but Rebekah . . . Are you planning a follow-up story? It doesn't seem like Payton and Chance's story is over yet. 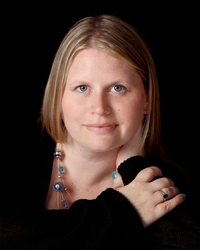 About the Author
Rebekah was born and raised in Michigan where she spent many late nights armed with a good book and a flashlight. She’s lived in Michigan most of her life other than the few years she spent in the U.S. Army. At which time she got a chance to experience Missouri, Kansas, South Carolina, and California. Rebekah has a business degree from University of Phoenix and currently works full time for the court system. In her free time she writes YA stories, anything from YA Fantasy to YA Contemporary Romance. Rebekah also has a big family (6 kids) she likes to consider her family as the modern day Brady Bunch complete with crazy road trips and game nights. When not hiding at her computer, Rebekah enjoys reading, singing, soccer, swimming, football, camping, playing video games, traveling, and hanging out with her family and gazillion pets.
Website | Goodreads | Facebook | Twitter