#Review: The Head of Medusa (Elementals 3) by Michelle Madow

THE HEAD OF MEDUSA 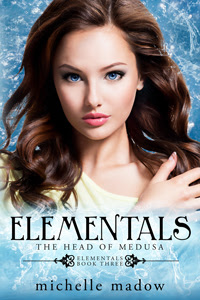 The epic story of witches, gods, and monsters that USA Today called a “must read” continues in the third book of the Elementals series!
When Nicole Cassidy moved to a new town, she discovered that she was a witch descended from gods. But that was nothing compared to learning that it was up to her and four others with mysterious elemental powers to help save the world from the Titans, who would soon return to Earth.
Now her relationship with Blake — the fire Elemental — is finally heating up. But she must remain focused, because Typhon, one of the deadliest creatures in history, has escaped from the weakening prison world. Only one object can destroy him — the head of Medusa herself.
Follow the Elementals as they journey to the end of the Earth, facing choices that will put their lives and the entire world at risk. Will they all survive the mission? Find out in the riveting third book in the Elementals series, The Head of Medusa.

DISCLAIMER: I received a copy of this book from the author, in exchange for an honest review. I have reviews for the previous books in the series. If you would like to check those out, click the following names: Nicole Blake  - Refraining from spoilers, but will be sure to get main points across.

My Rating: 5 of 5 Stars.
Michelle does it again! Nicole and Blake are starting their relationship. The 'Elementals' have the task of seeking out the head of Medusa herself. However, in order to do that they must retrieve Athena's sword, because it is the only weapon that can slice Medusa's head clean off her body. Not an easy task. We receive some "help" from a character from the previous book, but it may or may not go according to plan. This books ends on quite the . . . what's the word . . . Suspense and shock note. O.O Yep. Need I say more?
Michelle is the queen of cliffhangers, but I still love her for it.
Posted by Haddie at 6/24/2016 08:30:00 AM