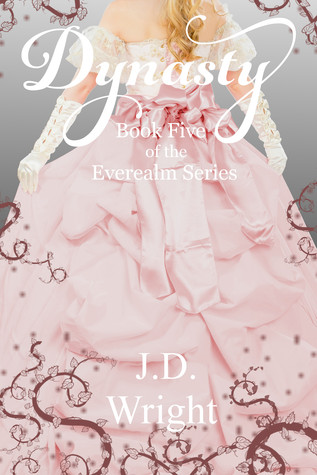 Trouble has been brewing in Everealm ever since Queen Breestlin was named the new ruler of Junacave. Meddling kings, queens, wizards, and imps, have wreaked havoc on the land and its inhabitants. After the assassinations of kings in two separate kingdoms, followed by a stern warning to ward off retaliation, the balance of peace has come to a head. Our rulers must decide how to deal with the tyrant King Silas, once and for all.

Magic has shifted ever since the breaking of the Blood Moon Crystal and return of female magics to the realm. The Elder Mage must set forth new boundaries for all wizards and sorceresses, in hopes to earn their trust and prevent another war between the divine creatures. But secrets hiding in the shadows could unravel Sidonie’s plans before they can even begin.

Join us for the exciting conclusion to the Everealm Series!

DISCLAIMER: I received a copy of this book in exchange for an honest review. This review does not contain spoilers, aside of a few shouts o excitement.

What a great way to end the series. Almost everyone is having babies; a lovely bard and a prince finally reconcile and gain their own kingdom. An exiled Mage and his princess/sorceress are given Royal position. A young princess receives the most treasured gift anyone could ever wish for.

My Rating: 5 of 5 Stars.
This was such a great conclusion to a series I have come to love and enjoy. This book was not as "explicit" as the previous books, but all the steamy romance is there. The characters! *SCREAMS* And when Finn got his Adelphie back, I cried! She remembered! I was so happy!

Click the covers below to see my review for the other books in the series!

Be on the look out for the authors new series Songs of Everealm!