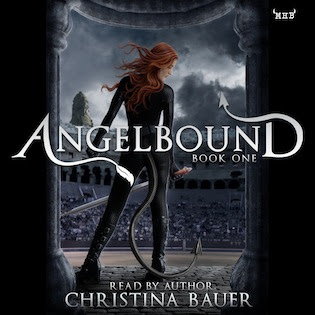 
*Now an audio book!*
Eighteen-year-old Myla Lewis is a girl who loves two things: kicking ass and kicking ass. She’s not your everyday quasi-demon, half-demon, and half-human, girl. For the past five years, Myla has lived for the days she gets to fight in Purgatory’s arena. When souls want a trial by combat for their right to enter heaven or hell, they go up against her, and she has not lost a battle yet.
But as she starts her senior year at Purgatory High, the arena fights are not enough to keep her spirits up anymore. When the demons start to act weird, even for demons, and the King of the Demons, Armageddon, shows up at Myla’s school, she knows that things are changing and it is not looking good for the quasi-demons. Myla starts to question everything, and does not like the answers she finds. What happened 17 years ago that turned the quasi-demons into slave labor? Why was her mom always so sad? And why won’t anyone tell her who her father is?
Things heat up when Myla meets Lincoln, the High Prince of the Thrax, a super sexy half-human and half-angel demon hunter. But what does a quasi-demon girl to do when she falls for a demon hunter? It’s a good thing that Myla is not afraid of breaking a few rules. With a love worth fighting for, Myla is going to shake up Purgatory. 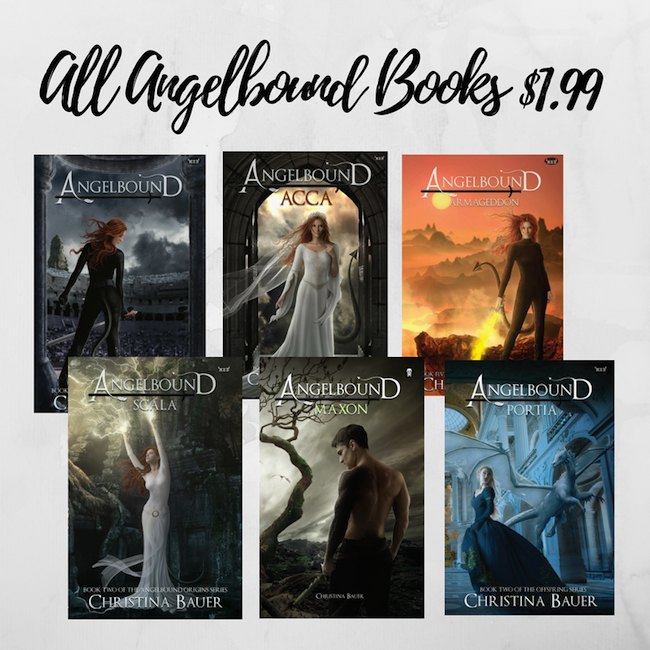 Monster House Books is celebrating the launch of the audiobook version of the best seller Angelbound, both on iTunes & Audible! As a result, every launched book in the series is only $1.99, aka more than 50% off…And that includes Angelbound ACCA, which was only released a few months ago!
—

The Prince guides me to sit on the lip of the fountain. I hop up onto the edge, feeling the warm stone beneath me, my legs dangling below. Stepping back, Lincoln examines me, his eyes glistening with wonder.
“There.” He hooks his thumbs into the waistband of his leather pants. “That’s how you looked when I first saw you by the lake.”
I nod. That’s right; he found me fighting Doxy demons in the water. “So, that’s why you brought me here?” I scratch my cheek. That’s a little strange.
“Well, I think about that night all the time. Maybe too much.” He shoots me a shy smile. “That sounds kind of crazy, doesn’t it?”
“Depends.” I move my mouth to one side, considering. “What’s the interest?”
He rubs his neck with his hand. “It’s a bit of a story, actually. I was chasing down some Doxy demons at the Ryder stables. I thought you were another thrax, tracking the same pack.”
I mock-frown. “Another guy, of course.”
He sets his hand on his bare chest. “Guilty as charged.” He steps closer, my heart thuds harder in my rib cage. “You disappeared into the water. I thought you’d be drowned, but you came out fighting.” He pauses before me, setting his warm hands on my bare knees. A thrill of heat whirls about my belly. His palms are calloused in all the right ways for a warrior.
With gentle pressure, Lincoln guides my legs apart. My heart rate goes through the roof. “You were fighting like a demon yourself, eyes glowing red in the darkness. And you were laughing.” The Prince presses his firm body against my soft curves. My breath hitches. Damn, that feels good.
Lincoln notices my little gasp and smiles. “I saw you were a woman, a warrior.” He leans in close, his mouth a breath above my own. “A force of nature. From that day on, I’ve thought of you, that night, and the water.”
I inhale deeply, ready to say ‘I never met anyone like you before, either. You make me crazy, too. In a good way.’ I speak, but two words only: “I understand.”
His voice comes out low and husky. “Good.”
Our mouths meet, fierce and rough, every flick of the Prince’s tongue driving more heat between my legs. My arms slide about Lincoln’s bare shoulders, sensing his velvet-soft skin over solid muscle. Suddenly, I want to run my hands over every inch of his body. Lincoln’s fingers press around my thighs, tracing the hem of my tunic. Desire rockets through me.
A thin bolt of lightning strikes the ground a few yards away. Low rolls of thunder shake the air.
My head snaps to the spot of grass where the lightning hit. It’s a smoldering patch of black by the fountain’s edge. “Did you see that?” This is the third time lightning strikes when I feel strong emotions around Lincoln. Even I’m having a hard time pretending it’s a coincidence.
“No.” Lincoln kisses my neck, then gently bites my earlobe. My legs go wobbly beneath me.
“But Lincoln, aren’t you worried about the–”
He frames my face with his fingertips. “No.” Fire burns in his mismatched eyes. “Kiss me, Myla.”

About the Author
Christina Bauer knows how to tell stories about kick-ass women. In her best selling Angelbound series, the heroine is a part-demon girl who loves to fight in Purgatory’s Arena and falls in love with a part-angel prince. This young adult best seller has driven more than 500,000 ebook downloads and 9,000 reviews on Goodreads and retailers. It is now available as an audiobook on Audible and iTunes.
Bauer has also told the story of the Women’s March on Washington by leading PR efforts for the Massachusetts Chapter. Her pre-event press release—the only one sent out on a major wire service—resulted in more than 19,000 global impressions and redistribution by over 350 different media entities including the Associated Press.
Christina graduated from Syracuse University’s Newhouse School with BA’s in English along with Television, Radio, and Film Production. She lives in Newton, MA with her husband, son, and semi-insane golden retriever, Ruby.
Be the first to know about new releases from Christina by signing up for her newsletter: http://tinyurl.com/CBupdates
Stalk Christina on Social Media – She Loves It!
Blog / Facebook | Twitter | Instagram | LinkedIn | Website