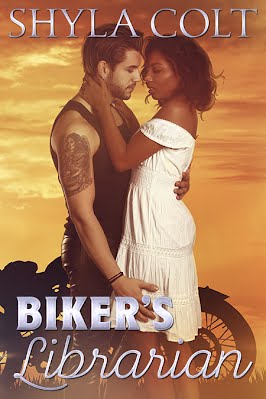 Recovered from an abusive relationship, Juliette Moore is ready to live life on her own terms. Successful, intelligent, and slightly timid, she makes a pact with her best friends to seize the day. She gets more than she bargained in the tall, dark, and dangerous biker Shooter.

Drawn to her purity and charm, Shooter, finds himself smitten before he knows what’s happening. With his claim firmly placed, he’s ready to go to war when she’s threatened by a madman from her past. Together they weather life’s storms and find common ground as they merge their two very different worlds.

DISCLAIMER: I received an ARC of this book for honest review and as part of this tour. My final opinions are my own and remain unbiased.

Oh, I hope I get to know what happens next! I loved Shooter. I love how he was prepared to defend Juliette from her ex. I tell you: Anyone who steps up like this automatically has my respect. No one should be mistreated, man or woman. Back to the book. I found myself liking

MY RATING: 4 OF 5 STARS.
I will say that Juliette could have been a bit more developed. She wasn't a wishy-washy character, but I just had the feeling of "hmm, maybe she can be a bit better". I don't know, thats just me, but it didn't put a damper in reading and enjoying the story.

ENJOY AN EXCERPT!!
“Juliette… someone is out front asking for you.” Billy, the library’s volunteer, looked confused and slightly pale. The freckle smattered across the bridge of his nose stood out, and his bright blue eyes held a note of fear.
“Are they upset?” she asked standing from the bottom shelf she’d been restocking.
“I don’t know. I think his face is just fixed into a permanent scowl.” Billy gestured toward the front of the building. His long russet hair fell across his eyes. “I left him at the desk. Do you want me to call security?”
Excitement raced through her. Did Shooter actually come here? After two days of nothing, she’d chalked their night flirting to a one-off. “No, its fine, Billy. I think I know the person you’re describing.” She checked her hair for flyaways, smoothed the wayward pieced into place and straightened her white button-up and gray skirt. She took a deep breath and walked out of the row of books, careful to pace her steps. I don’t want to seem too eager. The biker shocked her with his charm, wit, and though she was ashamed to say it, his manners. He’d been raised right by someone. As she grew closer to the front desk she spotted his unmistakable frame leaning against the desk. His dark hair was swept back off his face and he grinned up at her.
“Excuse me, Miss, I’m in search of a good read.” The shit-eating grin stretched across his handsome face made her heart race.
“I think I can help you with that, sir. What kind of story are you in the mood for?”
“A mystery.” There was a weight to the words she didn’t quite understand.
“What kind of mystery are you looking for?” She reached the desk and stopped a few feet away from him.
“Isn’t the fun part choosing the book and discovering where it takes you?”
“To be honest, I’m surprised to see you here.”
“I almost didn’t come. I’ not a nice man, Juliette. I can’t promise you I’ll be good for you. But I will be good to you.”
“Why?” She wanted to believe him, but she’d made a mistake before. Masculinity attracted to her. She was a throwback, someone who liked a man to be a man— bold, confident, strong and chivalrous. The last time she’d been blinded by wealth, charm, and polished good looks. She thought she’d found her real-life Gatsby with Peter Stant, but she couldn’t have been more wrong.
Shooter was none of those things. Upfront and honest to the point of being harsh, he had an old-world quality. A warrior’s soul dressed in the gear of a biker.
“You remind me of things I haven’t touched on in a long time. My parents were old school. You bring that out in me.”
She licked her lips. “I like that.”
“Oh, yeah? Why? You trying to take a walk on the wild side? Is this some sort of dream fulfillment? The little librarian trying to live out some sort of romance-book scenario?”
The words made her blink rapidly. “You just went from sweet to asshole in less than three seconds and you’re questioning me?”
He laughed. “Just checking, I’m no one’s pet project.”
“I’m not interested in playing games, or trying to tame a man. You seem like the type of person who knows who he is and what he wants. It has an appeal. You’re blunt, but honest. I like that.”
“You think you can handle it?” His brow furrowed and the corners of his lips turned down.
“I can handle more than you could imagine.” Juliette placed her hands on her hips and returned his stare.
“All right.” He held up his hand in a mock defeat. “I came to invite you to the lake today if you’re free.”
“I actually get off work in about an hour.” She’d been on the clock since seven, bringing inventory up to date and moving on to the usual opening duties.
‘I’ll come back here in an hour and half, be ready.”
“Where are we going?” she asked.
“Lake Elsinore with a few friends, pack light, we’re taking my bike.” With a slick smile that made her nipples harden, he turned and strolled out of the library, taking her breath with him.
Her thoughts turned to the man she’d mistaken for her prince charming, and the small ways he’d slowly broken down her self-esteem.
What the hell does one wear to a day on the lake with bikers? Her stomach knotted. What’s he going to think of me in a swimsuit? It’d been a long time since she exposed herself to a male. You’re not going to the gym today, you need to be careful or those curves will turn to plumpness. That’s what you’re going to wear to the party? Let’s go back to the clothes and try it again, you’re looking whorish. His negative voice attempted to creep back in. She slammed the door shut. She didn’t want to chase Shooter away. There was something different about him, something worth fighting her demons for.

Shyla Colt is the sassy international bestseller of the popular series Kings of Chaos and Dueling Devils M.C. This genre-hoppers stories feature three of her favorite things: strong females, pop culture, and alternate routes to happy ever after. Listening to her Romani soul, she pens from the heart, allowing the dynamic characters, eccentric interests, and travels as a former flight attendant to take her down untraveled roads.
Born and raised in Cincinnati, Ohio, this mid-west girl is proud of her roots. She used her hometown and the surrounding areas as a backdrop for a number of books. So, if you’re a Buckeye, keep an eye out for familiar places.

As a full-time writer, stay at home mother, and wife, there's never a dull moment in her household.
She weaves her tales in spare moments and the evenings with a cup of coffee or tea at her side and the characters in her head for company.