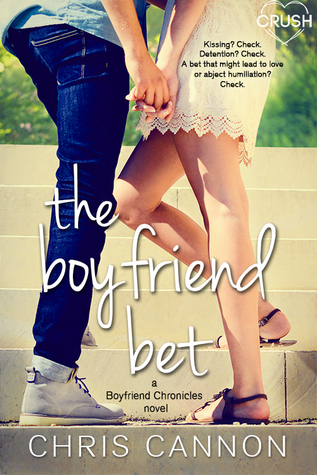 Disclaimer: This Entangled Teen Crush book contains multiple PDAs, after-school detentions, and gambling on the side. Warning: betting on a boyfriend is bad for your health.

Zoe Cain knows that Grant Evertide is way out of her league. So naturally, she kisses him. Out of spite. Not only is Grant her brother’s number-one nemesis, but he has zero interest in being tied down to one girl. She’s shocked—and secretly thrilled—when they start spending more time together. Non-exclusively, of course, but that doesn’t mean Zoe can’t change his mind, one PDA and after-school detention at a time.


Zoe’s brother claims Grant is trying to make her his “Ringer,” an oh-so-charming tradition where a popular guy dates a non-popular girl until he hooks up with her, then dumps her. Zoe threatens to neuter Grant with hedge clippers if he's lying but Grant swears he isn’t trying to trick her. Still, that doesn’t mean Grant is the commitment type—even if winning a bet is on the line.

DISCLAIMER: I received an e-galley of this book (via NetGalley) in exchange fr honest review. Recently read Blackmail Boyfriend and fell in love. When I saw the series receive a new addition, I had to see whose romance was about to be told.

Zoe kisses Grant Evertide in front of her brother to annoy him. Boom. That is how this book begins. I don't think I need to say much more about that other than THEY BOTH ENJOYED THAT KISS. Grant has a stalker ex, and Zoe just has a jerk-ish older brother whom she loves to spite.

Regardless of their "social status", somehow Grant, and his buddy Aiden, keep ending up at Zoe and Delia's lunch table. Sometimes Grant has an entourage, other times he doesn't. There is something intriguing and different about Zoe that Grant just does not understand. But at the same time, he wants to be her friend. Zoe, however, is looking for something a bit more substantial.

While Delia and Aiden seem to hit it off (or so we think), Zoe and Grant have a roller coaster of a relationship. She wants a boyfriend, he doesn't know what he wants. Yet, when you choose to put a little faith, and trust, into something, the most amazing things can happen.

My Rating: 5 of 5 Stars.
Girls usually look for commitment. It is understandable how Zoe was feeling towards the end. She'd never had a boyfriend before, so all of her doubts just . . . blew the lid off the boiling water. I admit feeling like Zoe sometimes.  I am thinking, and hoping, Delia's story is the one that will be told next. Because there were some hints in the end with Aiden. It was so subtle, but I have a gut feeling that is the one coming next. ♥

Also from this author: