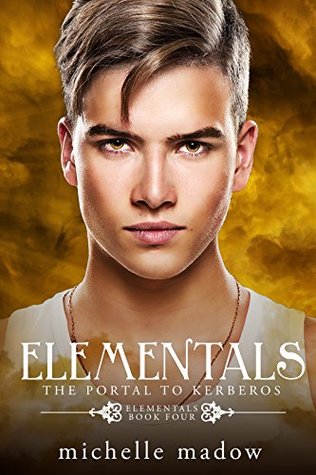 She will venture into hell to save the one she loves.

After being betrayed by one of their own, Nicole watches helplessly as Blake is snatched into the prison world of Kerberos—along with Medusa’s head, which is the one item they need to stop the Titans from rising again. Now Nicole and the other Elementals must enter the portal, find Blake, and bring him and Medusa’s head back to Earth before the deadly monster Typhon returns and wreaks havoc on the world. But there’s one catch—their elemental powers don’t work in Kerberos. In a dimension designed to make those within it lose touch with reality, and that’s filled with dangerous creatures who want to stop them from completing their task, will they make it out alive?

In this penultimate book of Nicole’s story, join the Elementals as they journey through hell to save the world… before it’s too late.

A thrilling fantasy adventure in a contemporary setting with Greek mythology and sweet romance, Elementals is a YA series that will keep you on the edge of your seat wanting more!

DISCLAIMER: I received a copy of this book (via the author) in exchange for honest review. Might contain vague spoilers, but I will try to keep them under the carpet.

I cannot believe the fourth book has already ended. And again! Michelle, you are queen of cliffhangers!

What would go through your mind if the one you love was taken captive by someone you thought you could trust and thrust through a portal to the one of the underworlds? You would want to do everything in your power to get them back, correct? Well, this is precisely what Nicole is thinking and she downright almost walks through the portal before thinking things through.

Kerberos is extremely difficult to navigate. There are obstacles that must be avoided. And instructions that must be followed. Nicole, Danielle and Chris receive some help from a deity, someone who knows his way around very well. Things go a little hay-wire; there is devastation ahead, but it will all work out.

My Rating: 5 of 5 Kerberos Monsters.
This book had me on all sorts of buzz. For one, though I enjoyed reading Greek mythologies and history, I was never one to read such books (such as witches and monsters). This series got me into it. Super fun to read!
I cannot believe this series is nearly over! *CRIES* I feel as though I have only just started, but it really is almost over! There is only one possible solution to the matter. The moment Michelle releases the final book, I will simply have to go back and read the entire series again.