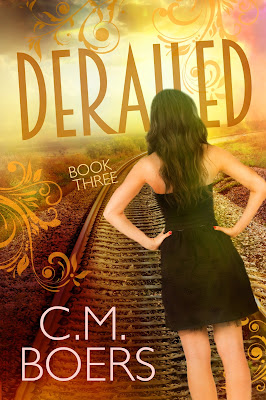 Abby Martin has normal problems for a teenage girl—her dad lives in another state, her mom’s boyfriend is moving in, and school and work are stressful. But these are the least of her concerns when she begins receiving threatening notes and a black SUV stalks her at night. As the web of danger tightens around her, panic sets in. With the help of her boyfriend, Eli, and best friend, Casey, she must find out who is obsessed with her before her nightmares come true.

Complicating her life further, Eli and Casey are both acting strangely. Who can she trust? And will she figure out what’s going on before she ends up dead?

DISCLAIMER: I received all three books in exchange for honest review, as part of this tour. I have read the other two books, but am only sharing my review for Derailed in this post. I shall share reviews for the other books at another time. This is the third book in the series, so I shall have a hold on spoilers . . . I hope. ♥ *WINKS*

Firstly, can we take a moment to admire the covers? I love covers that show simplicity, but still have a bit going on. The cover for Derailed definitely fits the plot and the train tracks provoked questions in my mind when I first saw it.

Abby Martin is quite a character, and it was fairly easy to relate to her. Her friends and her family, her boyfriend. She is going through the aftermath of her friend's kidnapping and she is trying to help Eli (her boyfriend) cope after his mother's passing. Heartbreak moments. Eli seems to be distancing himself. Lost in thought, entranced at times. Completely zoning out and not letting Abby help him. I'll be honest, if I had a boyfriend and he would not let me help him cope (despite him needing time) I would have lost it already.

In total honesty, I did not see how the story would be paranormal. Not at first. But then it began to seep in and wow. It was intriguing; the element added to the plot and I was thoroughly entranced. It seeps in and just grabs you.

My Rating: 4.5 of 5 Stars.
I cannot believe this is only the third book. There is so much that has already happened, but I know and feel the story is not complete yet. I am so glad the author is planning a fourth book, because I really want to know what happens next! 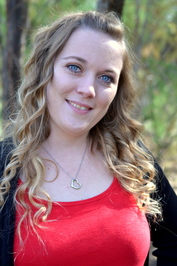 About the Author
I am a wife and mother of three. I grew up in the sunshine state of Arizona with a love of reading and an ambition to write. But I never took my writing seriously until after the birth of my first child. After that I took up writing more seriously in my spare time and I haven't stopped since.