Hey everyone; it's Haddie! You may have noticed that I have posted a couple reviews (really amazing book BTW). Be sure to check those out. I thought I would take a little time to share some books that I think you should check out. I am not going to bog you down with books, but there are the ones I think you all should have a look at. So here we go! 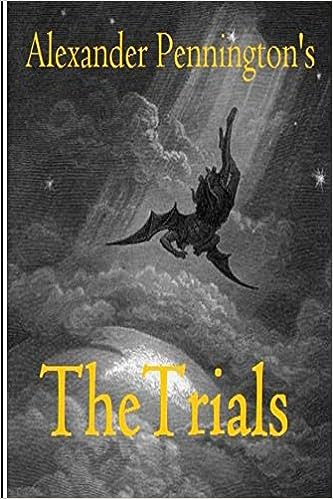 First on the list is The Trials by Alexander Pennington.
This book has just been released, and of course, Alexander is a buddy of mine, so I really do think you should all check it out.

As the world becomes more seeded with hatred between country's, racism, politics, a evil force decides now is the time for action. That evil force is named Lucifer. After hundreds of years of planning he is ready to begin the apocalypse and commence his final battle against God. But God has not given up on humanity, instead he puts his trust in 2 marines named Markus and Kyle Ridge. Together these brothers much find a way to prove humanities innocence and somehow beat the devil himself. But the devil is not the only obstacle in their path. As humanity begins to fall into Lucifer's grasp God decides the only way to truly see if humanity is worth saving is a survey of biblical proportions. God raptures 99% of the population from the earth only leaving 2 cities and those who are chosen to represent humanity. With the remaining population in a state of confusion the archangel Gabriel sends everyone a message in their sleep informing them they are about to commence of a series of trials in order to see if at the center of humanity if we are truly good people or if we are savages. The Trials is a book which not only examines the proceedings to revelations but shines a new light on human nature itself and asking the chilling question, does humanity deserved to be saved?
Buy on Amazon 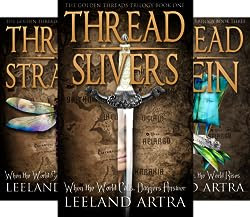 Another book I think you should check out are Golden Threads Trilogy (3 Book Series) by Leeland Artra. I own the first book in the series, but have not gotten around to read it yet.
From Book 1: She craves fame. He wants freedom. When their worlds crumble, even survival may not be an option.
The world is driven by wizards, gods, and an imperial space marine 20,000 years into our future. Fame-hungry female mercenary Ticca is willing to skirt the edges of her warrior's code if it brings her the fame she desires. Her hopes of making a name for herself by spying on assassins are dashed when she's forced to kill the assassin she was hired to watch.
Lebuin is a rich journeyman mage who's just discovered his new rank involves actual journeying. He hires Ticca to help him advance to master and return to a life of comfort as quickly as possible. He's willing to spend all he has to make it happen, but the mage and his mercenary get much more than they bargained for.
Trapped in the crossfire of a vast power game, Ticca and Lebuin must survive a battle between rulers, guilds, and gods. In a land of magic and technology, they'll need to give everything to keep the world and themselves in one piece.
Thread Slivers is the first book in an epic fantasy/speculative sci-fi trilogy set in a distant future. If you like heroic, humorous, and exotic characters in a world that mixes elements of paranormal and hard sci-fi, then you'll love this beautiful, original, and thought-provoking adventure.
Buy on Amazon 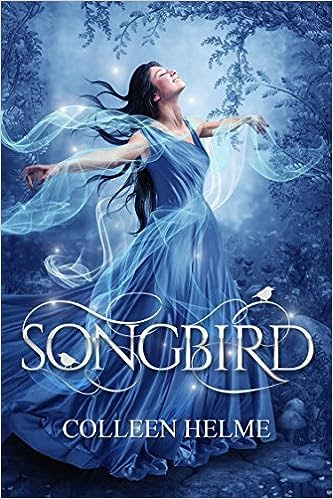 Finally, Songbird by Colleen Helme.
I have not had the opportunity to get a copy of this book myself, but I have heard nothing but great things about it.
As the ambassador from Braemar, Bran is sent on a diplomatic mission to the Old Country to establish trade relations. But the real reason for his mission is to uncover the secrets of a potent elixir that can give magic to anyone who drinks it.

While there he encounters the Songbird, a beautiful, exotic woman, and the king’s most prized possession. Her song is full of magic, and he determines that her people must be connected to the deadly elixir. In exchange for her help, he is willing to risk his life to set her free. What he doesn’t expect, is to fall under her spell…

I don't know about you people, but all these books look awesome. I have all of these on my A-Wish-list. My plan is to buy them in the order after my next. Enjoy these recommendations and be sure to comment your own recommendations. I am very interested in knowing what you are reading.