#BookBlitz: In the Hope of Memories by Olivia Rivers @XpressoTours 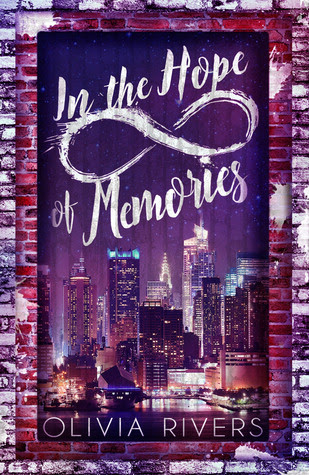 
Hope is dying.
Hope Jackson has lived her short life to the fullest, but her four closest friends are dangling on the brink of disaster. Right before dying of a rare heart condition, Hope sets up a scavenger hunt across New York City using her graffiti art. The directions she leaves her friends are simple: Solve the clues hidden in her art, and they’ll solve the problems haunting their lives.
Hope is dead.
Two days after her heart fails, Hope’s friends are thrown together:
Aiden, her best friend, whose plans to attend college have been scattered by his OCD.
Kali, her foster sister, whose last ties to sanity are as razor-thin as her anorexic waistline.
Erik, her high school crush, whose success as an athlete is based on a lie with no end in sight.
And Sam, her online pen-pal, whose perfect life exploded into chaos in the aftermath of a school bombing.
Together, the four teens take to the streets of New York to complete Hope’s scavenger hunt and fulfill her dying wishes. But in order to unravel the clues hidden in Hope’s graffiti, her friends will need to confront their personal demons head on.
Hope is within reach.

Goodreads / Amazon / Barnes & Noble / iBooks / Kobo / Scribd
EXCERPT:
“Wait!” I slam my hand against the door to stop it from clicking shut, wincing as the splintered wood digs into me. “I’m looking for Hope. Hope Jackson. She said she’d be here.”
The dude shakes his head. “She’s dead.”
My heart stutters a fast and hard beat, like it does right when I get tackled on the field. “No. No, she’s not. She’s the exact opposite of dead. Today is her eighteenth birthday. Her birthday party is about to start right now.”
Official Reason Number Infinity it Sucks to Be Going Blind: When you can’t see right, you can’t stop a fist from colliding with your face. The dude’s knuckles crash into my jaw, and I yelp, more out of shock than pain. I’m about to pound my own fist into the freak when he starts talking again, this time in a tone that’s actually kind of pissed.
“She’s dead, you jerk! You really think it’s funny to joke about that?”
“I’m not joking!” I rub at my jaw with the back of my clenched hand. Part of me is itching to mess up this guy’s face, but a larger part is starting to panic. “You’re the one with the wrong info,” I say, silently praying I’m right. “Hope isn’t dead.”
The dude stares down at his hand and slowly curls and uncurls his fingers, like he can’t quite believe he just threw a punch. Then he whispers, “You’re not messing with me?”
“No! What kind of sick joke would that be? Like I said, I’m just trying to find her birthday party. I got an invite from her, I swear. It said to come here.”
“Oh.”
Apparently, this conversation isn’t weird enough for him, so he has to add in some awkward silence. Fan-freaking-tastic. Just when I’m starting to think he’s slipped into a coma, he says, “Sorry I punched your face.”
I take a deep breath. “Just tell me where her birthday party is, okay?”
“I told you, there is no party. Hope is dead.”
“Christ, are you seriously going to make me explain this again? She’s not dead. It’s her birthday today. As in the day when you celebrate a person being alive.”
“It would have been her birthday,” the dude says, slipping back into his strange monotone. “But now she’s dead.”
The seriousness in his voice makes my gut twist, and for a moment, I wonder if maybe he hurt Hope. My hand edges toward my pocket, but just as I’m considering grabbing my cell phone and dialing 9-1-1, I see a tear trickle down his cheek. It looks strange on his expressionless face, but another tear quickly follows, and then a third. He sniffs and turns away, wiping his right eye on the battered sleeve of his hoodie.
“What happened?” I ask, my voice a cracked whisper. All sorts of scenarios rush through my head—Hope’s plane crashing on vacation, a car accident, getting caught in a wrong-place-wrong-time shooting…
“You don’t know?” the dude asks.
“No. Was it in the news?”
The smallest beginning of a frown tugs at his lips. “Of course not. Why would the news report about a stroke victim?”
“Stroke?” I repeat. “She had a stroke? What…why? What triggered it? She’s a health freak.”
He blinks slowly and then says again, “You don’t know?” Author Bio:
Olivia Rivers is a hybrid author of Young Adult fiction. Her works include the independently published novels “Frost Fire” and “In the Hope of Memories,” along with the traditionally published novel “Tone Deaf” (Skyhorse 2016.) As a certified geek, she enjoys experimenting with new publishing technologies, and her online serials have received over 1,000,000 hits on Wattpad.com. When Olivia isn’t working as a writer, she’s a typical teen attending college in Northern California. Olivia is represented by Laurie McLean of Fuse Literary, and nothing thrills her more than hearing from readers.

1. Can you tell us a little about your new book? Absolutely! “In the Hope of Memories” tells the story of Hope, a young, eccentric graffiti artist who’s stuck in the foster system. When Hope gets diagnosed with a terminal heart condition, she realizes that her four best friends are on the brink of ruining their lives, and that they might fall apart once she dies and isn’t there to support them anymore. So Hope uses her graffiti art to create an elaborate scavenger hunt that’s meant to “fix” her friends so she can die in peace and know they’ll be alright without her.
2. Do you have a favorite character? Asking authors this question is like asking a parent who their favorite child is. So my answer is Aiden, because I am terrible enough to actually pick favorites. Aiden is intensely logical, loyal, and moral. He’s a total sweetheart, and I see him as being everything that’s right with the world. But since he has OCD and an autism spectrum disorder, the world sees him as being “wrong,” just because no one else understands him. As an author, writing Aiden’s character was both a heart-warming and gut-wrenching experience, and he’ll always be a favorite of mine.
3. What genre is “In the Hope of Memories?” That’s a very good question, and since the book stretches across lots of different YA genres, everyone from my agent to my author friends can’t quite figure out the answer. However, I think my critique partner managed to sum it up pretty well: “It’s like if a Colleen Hoover book had a baby with The Breakfast Club, and that baby was given a huge dose of shitty luck and LSD.”
4. Are any of the characters from “In the Hope of Memories” based off yourself? Nope, definitely not! I’m a very reserved person, so the thought of sticking myself in a book for all the world to see is… horrifying. That being said, my characters ended up with a few of my own quirks. I can’t tell the difference between right and left, just like my character Erik, and this causes all sorts of shenanigans when someone has to give me driving directions. And like my character Sam, I also enjoy wearing The Flash t-shirts when I use my wheelchair, because irony really is the best medicine. Also, my laptop named Vladimir makes a cameo appearance in “In the Hope of Memories.” (R.I.P. Vladimir.) But, aside from tiny quirks like that, none of the characters or events in the book are based on my real life.
5. Is “In the Hope of Memories” connected to any of your other books? Yes, in some ways, it definitely is! While the plots don’t directly intertwine, if readers look carefully, they’ll find references to my other books within the pages of “In the Hope of Memories.”