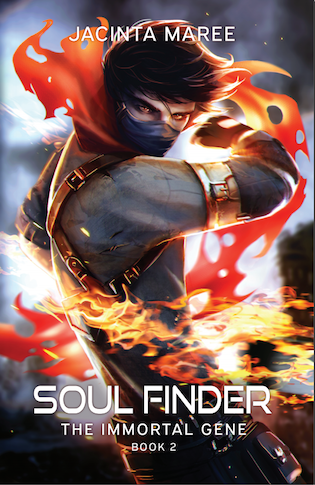 
Since being discovered as Soulless, Nadia has become a target for both terrorist groups and government corporations. Now, her only hope for survival rests in the hands of the man sent out to kill her: Diesel, the Mad Dog terrorist.
Diesel is determined to free himself of the never ending curse of reincarnation and the haunting memories that plague his mind. But when his search leads him to Nadia, a greater desire stills him from taking her life.
Unable to see into Diesel’s cracking mind, Nadia instead puts her faith into his strength, fueled by eleven generations of unmatched rage and insanity. Their tight-rope relationship balances the two between life and death, love and rage, trust and betrayal.
Tension pulls at the hems of their dangerous companionship, and as time runs out all madmen must eventually make their choice.
Book two of the thrilling Immortal Gene series dives deeper into the danger of trusting your heart over your head.

Enjoy an excerpt from the book!
Beyond the bodies left on the ground was a line of faces huddled opposite us. There must have been another fifteen prisoners inside the bunker, easily outnumbering me and Diesel. They clung to each other’s elbows and hips, moving in a single awkward unit like a spider, long limbs and shallow eyes. All of them were men, with the exception of some that were mere boys, no older than fourteen. Dirty. Starving. Wild. They didn’t look at Diesel but watched me. I was suddenly aware that I was the only female inside the hole. That was, until the next prisoner dropped in.
A blonde girl fell through the roof, landing on her side. All at once fifteen pairs of eyes turned to her. I looked at her too. She squinted into the darkness, blinded as I was as the lid locked shut above her head. The wheel knob turned. She didn’t move. I pushed off to reach her first, but Diesel grabbed me and shoved me back. He covered my mouth again as though expecting me to scream. I wanted to shout at her to run. Hide. Arm herself.
Fifteen pairs of feet moved quickly. Diesel covered my ears.

About the Author
Born in Melbourne Australia, Jacinta Maree considers herself a chocoholic with an obsession with dragons, video gaming and Japan. She writes a variety of genres including YA paranormal, steampunk, horror, new adult, dystopian and fantasy. Winner of 2014 Horror of the year and bestselling author, Jacinta writes to bring enjoyment to others while fulfilling her own need to explore the weird and the impossible.
Website / Goodreads / Facebook / Twitter