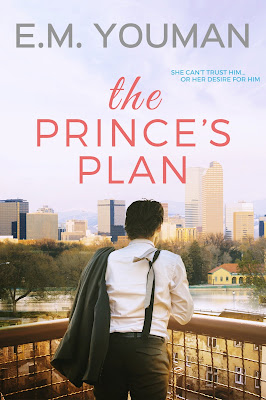 The Prince's Plan
by E.M. Youman

Marnie Ducello is way past second chances. Most days she’s fighting to forget the past and stay sober—a combination she doesn’t always pull off. She’s done waiting for Prince Charming. So when a sexy stranger turns out to be an arrogant, cab-stealing jerk, Marnie isn’t surprised. If only her rash reaction to his rudeness hadn’t resulted in her arrest. . .

Singer Danny Roland is no prince. He has fame, fortune, and a not-so-hidden addiction. He’s running from memories of the lives he’s ruined. Keeping his personal demons under control and out of the tabloids is what Danny wants more than anything. After a simple drug deal goes very wrong, Danny decides to make karmic amends—by finding the woman he abandoned to the police. Marnie’s a recovering addict, too, so he offers her the deal of a lifetime: a job as his personal assistant and a safe space in his home to live in if she stays sober.

Marnie is soon swept up into Danny’s world of prying paparazzi and vengeful exes. She can’t help the burning attraction between them, but she can’t trust Danny—or herself. And when Danny’s brother begins to pursue her, Marnie and Danny must both come to terms with the painful secrets that haunt them. They’re both broken…but maybe together they can be unbreakable.

DISCLAIMER: I received an ARC from the author for an honest review. WARNING: This book contains mentions of adult content, such as drug use, rape, sex and language.

I kind of knew what to expect going into this book. But at the same time, it was a complete mystery. Both characters have . . . issues and sufferings. The author is very clear and gives detail straight forward when expressing them. Danny's character had me reeling. Marnie's dark past was heartbreaking. To be straight honest, I teared up at some parts.

The contrast between lifestyles is . . . I wouldn't say drastic, but I would say it is a lot for Marnie to change from the dump life she lives to working as a PA (personal assistant) to Daniel Roland. Danny, though wanting to help Marnie, is in no position to actually sponsor her, when it comes down to it. But truly, it is the thought that counts.

The relationship that Danny has with his family is brought about through the loss of his father. But Danny has lost more than just his father.

My Rating: 5 of 5 Stars.
This is so unlike anything I've ever read. I cannot conjure up the right words to express what my experience was while reading this. It took me . . . maybe a week, or two, to read this book. It is fairly lengthy. Perhaps some details were best left out, but in the end, it works for the better.