SEE ME, SEE ME NOT BY ELODIE NOWADAZKIJ | COVER REVEAL!!! 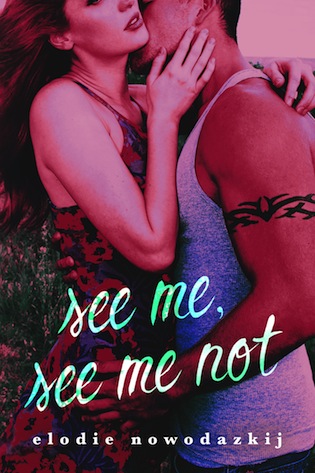 
The second standalone novel in the YA romantic suspense “Gavert City” series.


SEE ME,
Try as they might…
SEE ME NOT,
Tessa and Luke can’t escape their pasts.


Six years ago, Tessa Gardner’s sister, Mellie, disappeared. Despite lingering guilt and the never ending desire to find her, seventeen-year-old Tessa works hard to keep it together. Her grades are decent, and thanks to her part-time job, she can help pay her family’s bills. But when her childhood crush, seventeen-year-old Luke Simon, rolls back into her small Texan town, he threatens to topple the delicate balance she created. She’s drawn to him—and the way he makes her smile. He’s the only one who seems to understand her, but he’s got a dark past of his own. Even the fake psychics who swear Mellie is still alive tell Tessa that Luke will cause her pain.
Luke Simon knows a thing or two about guilt. He moved in with his uncle to escape his past, but memories threaten to eat him alive. He does what he can to keep his anger in check—quieting his thoughts by making out with one meaningless girl after the next. Tessa, and her long legs and her hard-earned smiles and her kindness is the only girl who’s ever mattered. She’s the one untainted memory he has from his childhood and he could talk to her for hours. He could do anything with her for hours. But the truth about his past might send her running. Or worse.
While Tessa and Luke try their hardest to live in the present, their pasts lurk in the shadows, more intertwined than they could imagine. When the bodies of the fake psychics are found, Tessa realizes that the truth about what happened to Mellie is right around the corner—and it may be too late to save her sister—and herself. 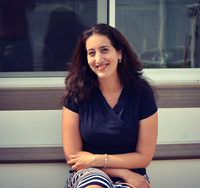 ABOUT THE AUTHOR
Want to read bonus scenes? Sign up for my newsletter (http://bit.ly/1Ddrft5) to get them!
You can also join my Facebook fan group (http://on.fb.me/1J2SYl1) for early excerpts of my upcoming books, giveaways or to just hang out with me :)
Elodie Nowodazkij was raised in a tiny village in France, where she could always be found a book in hand. At nineteen, she moved to the US, where she learned she’d never lose her French accent. Now she lives in Maryland with her husband, their dog and their cat.
She's also a serial smiley user.
Website / Goodreads / Facebook / Twitter