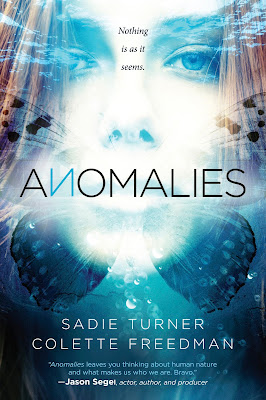 Keeva Tee just turned fifteen. All of her dreams are about to come true. She s about to make the trip to Monarch Camp to be imprinted with her intended life partner. One day they ll have perfect kids and a perfect life. But in her happy, carefree life in the Ocean Community, something weighs on her mind. She hears whispers about anomalies citizens who can t be imprinted. No one knows what happens to them, but they never seem to come back.

When Keeva arrives at Monarch Camp, her worst nightmare becomes a reality she is an anomaly. After imprinting, the people she loves change, and she starts to doubt everything she s ever believed. What if freedom and individuality have been sacrificed for security? And what if the man who solves all the problems is the very man who s created them and what if he isn't a man at all?

When Keeva finds a warning carved under a bunk bed she begins to understand: nonconformity will be punished, dissent is not an option, insurgents will be destroyed.

DISCLAIMER: I received a copy of the audiobook as part of this tour.

This story is brilliant. Keeva is a well created character. I love how she questions the behavior of the people around her. She wants to be paired with a partner; she wants the sensation of being prepared to live a life in the GG, but . . . Despite this, Keeva has been classified as an Anomaly. Meaning she could not be paired and this separates her from the norm and will undergo trainings and teachings so that she can be paired. Her friends all of a sudden are different. Not in how they might normally behave, but there is a noticeable difference about them.

The first scene had me . . . on edge. It takes skill to cause heart palpitations in a reader. And because it was an audio, it was all the more real for me. It was vivid and nerve-wracking, but it was amazing.

MY REVIEW: 4.5 OF 5 STARS.
Divergent fans, this is the book for you! This is not the start of a series, but personally I feel it truly depends on the book and the story. I felt that the authors concluded the story very well. I love stand-alone novels because I cannot always get the next book in the series, and this book gave me satisfaction. It was definitely much easier to hear this story told through audiobook. I think I did try to start this book last summer, but I don't know what happened. I am very happy with how this story played out. It did not feel rushed, due to being a stand-alone, nor did it feel like the authors were jamming so much into the story to make sure it every detail is told. It's perfectly proportioned.

About the Authors
SADIE TURNER is a Los Angeles-based producer and writer originally from Brighton, England, who works in business development with several Hollywood entrepreneurs. She has various projects in development, and also teaches yoga.
Author Links:
Website│Goodreads│Twitter│Instagram

COLETTE FREEDMAN- An internationally produced playwright with over 25 produced plays, Colette was voted “One of 50 to Watch” by The Dramatist’s Guild. Her hit musicalSerial Killer Barbie can be heard here.
Her play Sister Cities was the hit of the 2008 Edinburgh Fringe and earned five star reviews:  It has been produced around the country and internationally, fifteen times including Paris (Une Ville, Une Soeur), Rome (Le Quattro Sorelle) and Australia.  It is next up in  Chicago August 2016. She wrote the film which is currently in post-production and stars Jacki Weaver, Alfred Molina, Jess Weixler, Stana Katic, Michelle Trachtenberg, Amy Smart, Troian Bellisario, Tom Everett Scott and Kathy Baker. She  has co-written, with International bestselling novelist Jackie Collins, the play Jackie Collins Hollywood Lies, which is gearing up for a National Tour.
In collaboration with The New York Times best selling author Michael Scott,  she wrote the thriller The Thirteen Hallows  (Tor/Macmillan). Her novel The Affair (Kensington) came out January 29, 2013. The play of the novel earned both critical and commercial success as it toured Italy February through May 2013. Her sequel novel The Consequences(Kensington) came out January 28, 2014. Her YA novel Anomalies (Select Books) came out February 9, 2016. She also co-wrote the film And Then There Was Eve  which is currently in pre-production and begins principal photography May 2016.