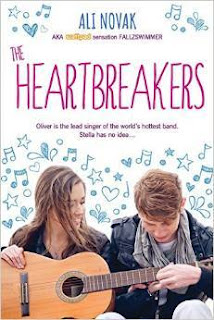 Book Description from GoodReads.com: "When I met Oliver Perry, I had no clue he was the lead singer for The Heartbreakers. And he had no idea that I was the only girl in the world who hated his music."

Stella will do anything for her sick sister, Cara—even stand in line for an autographed Heartbreakers CD...for four hours. She's totally winning best birthday gift this year. At least she met a cute boy with soft brown hair and gorgeous blue eyes while getting her caffeine fix. Too bad she'll never see him again.

Except, Stella's life has suddenly turned into a cheesy love song. Because Starbucks Boy is Oliver Perry – lead singer for the Heartbreakers. And even after she calls his music crap, Oliver still gives Stella his phone number. And whispers quotes from her favorite Disney movie in her ear. OMG, what is her life?

But how can Stella even think about being with Oliver — dating and laughing and pulling pranks with the band — when her sister could be dying of cancer?


DISCLAIMER: I received an e-ARC of this book (provided by NetGalley) in exchange of an honest review.

Characters/Plot: The description tells the outline of this book, but I must say that I was surprised that it went deeper than the surface. Yes, the cover gives off that it is a light-ish read, but it is so much more than that. Stella, Cara and Drew are the best sibling trio I have read in a long time. Oliver Perry is amazing; the band members of the Heartbreakers had me fangirling, and they are not even real people! They should be! Stella's sacrifice for her sister just  . . . No words. I have heard of that sort of donation before, (My Sister's Keeper) but to have read it in this manner moved me.

My Honest Opinions/Thoughts: The Heartbreakers has a wonderful story to tell. I cried (full on tears) twice while reading, and it has been a while since a book has done that to me. Being a major boy band fangirl myself, I could relate to Cara and her undying love for a band that does not even know she exists. I laughed, I cried; I was angered and I was frustrated alongside of Stella. This book was amazing, and I am so glad to have read it.

Extra: This book moved me to a place that I have not gone to in a long time. Ali Novak was always a favorite on Wattpad; I have followed her for five years. I read a portion of her novel "My Life With The Walter Boys" and have loved her work since. I am amazed at her work, and I admire her for achieving her goal. And to all you fangirls out there, this is the book for you.

P.S. Because I wish to show Ali Novak my support, I am waiting to have a bit more $$ to my name so that I can purchase both of her novels. They sit in my wish-list on Amazon, awaiting the moment that they will be shipped to me.


View all my reviews