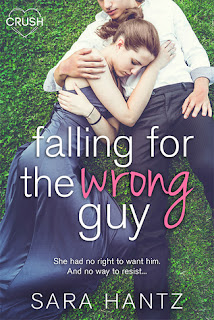 Description: Ruby Davis has a crush on her brother’s best friend. At least, he was his bestie until the big betrayal. Now Drew is off limits to everyone, especially Ruby. She can’t stand the way people treat him, or the way he feels about himself. It isn’t right. And those deep green eyes are calling to her.
Drew is scarred and damaged, and he has no business even looking at Ruby. But he can’t help himself. She’s beautiful, but he does his best to stay away. When they are assigned a school project, they become reluctant friends – even though they want so much more.
She’s torn between her feelings for Drew and loyalty to her brother. There’s no way they can ever be together...but love just might find a way.
GoodReads

DISCLAIMER: I received an e-ARC of this book (via NetGalley) in exchange for an honest review. (Also, I cannot resist anything from Entangled Crush. And I wrote this review while reading.)

Characters/Plot: Do not judge this book by the cover (though it very pretty), because this is not as light-hearted as you would think. At least, not in the first quater-half or so. In this book, though the description says the main character's name is Ruby, she is called Mia in the review copy(IDK if that was intentional, but I don't care). She works hard to get good grades and save money for college. At the beginning, Drew gives off the impression that he could use a hug. Literally, I wanted to write myself into the story

My Honest Opinions/Thoughts: Such a great story about healing wounds and forgetting the past. Something I relate to, yet again. There were parts that just wrenched my heart from my chest, and I felt like crying. Only the best books can do that to me, and this book is that great. Also, is the cover not the cutest?!

Extra: I'm back with more visuals! I mean, I only went as far as seeing Drew, so please forgive me for not seeing the girl. Drew has green eyes, so I thought of the perfect pair of green eyes. ♥ Do you know who this handsome dude is? I mean, I know his face, but I can never actually remember his name.

Drew Scott, ladies! Well, just his eyes, but *sighs* honestly, this is Drew.

About the Author
I was born in Northampton, England, the eldest of 4 children (I have 3 younger brothers), and I took my eldest child responsibilities very seriously. When I said jump, they asked how high. They’re all a lot taller than me now, so I’ve had to change tactics for getting my own way.
School and I weren’t a match made in heaven. I was bored a lot of the time, and it seemed much more fun to dream up ways of disrupting lessons than to actually pay attention. Which could explain why I was always in trouble! But I redeemed myself later, when at twenty-one I went back to full-time study. Except, I got carried away and became a bit of a qualification tart. I even worked in education for a number of years – lecturing.
But all the time I was never content. I knew there was something missing, just didn’t know what. Until I discovered writing.
I wasn’t one of those people who wrote from being a small child. I did read though. I’ve always been an avid reader. And it took me a few years of thinking about writing before I actually started. But now, I wouldn’t do anything else, and I never get bored!
I moved to New Zealand (a beautiful country) from the UK twelve years ago, with my husband and two children. After working at a university for three years I left to work in our motel and devote more time to my writing. I wish I’d done it sooner! Two years ago we moved to the Sunshine Coast in Australia. Another perfect place to write.
In my spare time I love going to the movies, watching TV, walking on the beach, and playing with our gorgeous Labrador.
Goodreads | Website | Twitter | Facebook | Instagram