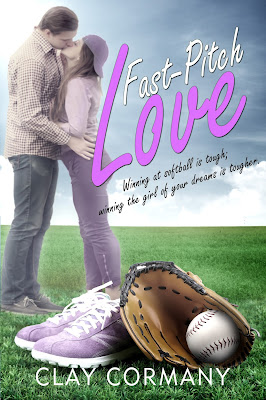 What does a high school boy do if he thinks the girl of his dreams will be an assistant for the softball team his mother coaches? Easy! He volunteers to be an assistant, too. That's what Jace Waldron does in Fast-Pitch Love. It might be his only chance to make a move on Stephanie Thornapple while her boyfriend is away. But Jace's plans go awry, and soon he faces the double challenge of coaching a team of mischievous preteen girls and learning there is more to romance than physical attraction.

Praise:
"The books has some unexpected twists and turns as the likeable but somewhat hapless Jace grows into a young man who takes responsibility for his life and his choices. Softball aficionados will have a particular affinity for this book because its game descriptions are extensive and detailed. Those who don't know softball will come to like and admire the young protagonist."  Gretchen Hirsch, author and book doctor

"I enjoyed this young adult novel by Clay Cormany. The story told from a guy's perspective made it especially interesting. I think a lot of young women would enjoy seeing romance from a guy's point of view. I also liked that the novel was innocent without gratuitous sex or swear words." Paulita Kincer, author of The Summer of France and Trail Mix

"Like the spin on a fastball, Fast-Pitch Love puts a new spin on the age old boy meets girl phenomenon. And what a wonderful spin it is. Clay Cormany weaves together the twin themes of teenage infatuation and a girls’ softball team. Along the way he does a wonderful job of mixing the excitement of youth sports with the impending showdown between two suitors of the same pretty girl."
The Dane

"Fast-Pitch Love is an unusual coming-of-age story since it's told from the guy's point of view. The characters are likeable and believable; the action well paced. You don't need to be a softball player, or even an athlete, to thoroughly enjoy Fast-Pitch Love."  Louise

DISCLAIMER: I received an e-ARC of this book in exchange for honest review, as part of this tour.

Eee! There is just something about guys and baseball (softball in this case) that always gets me. Jace's character is average to the everyday teenage boy. He wants to have a chance with the pretty girl in school. The works.

Some people will do almost anything, if it gives them the chance to get to know someone, right? (I can personally admit trying to join a group just to get near a guy I never ended up with afterwards . . . I actually didn't end up with anyone, but that's besides the point.)

It was insta-love for me to like Jace. Jace happens to be my favorite name recently.

Great book for the reader that enjoys young, clean, love. I think that's one of the best parts. Its s clean, down to language. Granted its a guy character. Boys will be boys. But thoroughly fantastic to read.

About the Author
Before writing Fast-Pitch Love, Clay Cormany spent over 20 years as a writer and editor for Ohio's State Board of Education. His creative work has appeared in numerous central Ohio publications, including the Columbus Dispatch and Spring Street, Columbus State Community College's literary magazine. He has also edited numerous books, including a three-volume biography of Christopher Columbus and A Death Prolonged by Dr. Jeff Gordon, which received coverage in the New York Times and on PBS. Fast-Pitch Love reflects the two years Cormany spent interacting with softball players and coaches both in practice and competition. He contributes the earnings from sale of the book to girls softball programs in central Ohio and elsewhere.