#BookBlitz: Worth Waiting For by Charity West | #Giveaway @Writer_Charity @YABoundToursPR 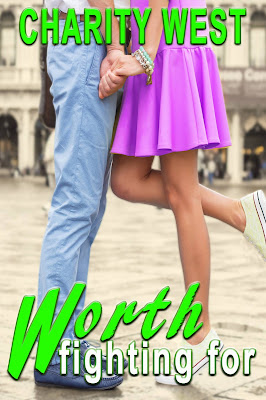 
High School senior Lily Rhodes has been in love with her brother’s best friend nearly all her life. When nineteen year old Jake joins the Marines and is shipped overseas, she worries she’ll never see him again, and wishes she’d been braver before he left. Lily vows that if Jake comes home, she’ll tell him how she feels. But when Jake is injured by an IED and is discharged from the Marines, he comes home changed, bitter and broken. Despite the fact he's loved Lily for the past three years, he no longer feels worthy of someone like her. Not one to back down from a challenge, Lily knows the best things in life are worth fighting for.

MOVIE LIST:
Some people have a playlist, but I have a movie list. I like to put my favorites on in the background while I’m working. My movie list for Worth Fighting For isn’t very long, but I watched/listened to these numerous times while working on this novel.

Charity West is a young adult/new adult romance author who has always had her head in the clouds. She had her first crush when she was four, and it lasted for six years. Then she quickly fell head over heels for another boy, until she had to move away and leave him behind. Jumping from one boy to another, she finally found a keeper when she was twenty, and she’s been married to him ever since.

By the time Charity was twelve, she was sneaking her mother’s Harlequin romances and reading them in secret when she was supposed to be asleep. Teased throughout middle school and high school for the bodice ripper covers on the books she openly read in class, she knew that one day she wanted to write her own happily-ever-afters. Subscribe to Charity West's newsletter!