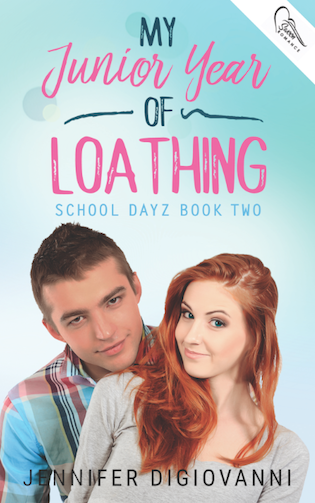 My Junior Year
of Loathing


Junior year is supposed to be tough. Exams, term papers, homework, college tours, and participation in extra-curricular activities can all add up to non-stop stress. But Melinda Banner has goals to achieve and dreams to make real. This year, she’ll be unstoppable. But even over achievers need a break.
While walking in the woods to take a break from the stress of it all, Melinda meets a boy named Connor. After a few more run-ins, the two settle into an uneasy friendship, if you can even call it that.
But Connor’s closed and mysterious. Whenever Melinda asks too many questions, he suddenly has to go or is no longer interested in talking. When they’re together, she’s torn between wanting him to open up and running away as fast as she can. Still she can’t seem to shake her budding interest in him.
Connor has his own way of looking at the world, and his views often conflict with Melinda’s practical nature. Can you like someone and loathe them at the same time? Is he even worth the emotional tug on her heartstrings or distraction from all things Junior year?
And, as if she needs another project right now, Melinda starts to obsess over the abandoned estate she passes on the way to school each day. Between Connor and the old estate, Melinda’s beginning to think she’s taking on too much.
But Melinda’s smart. She finds a way to indulge her interest in the estate and fulfill her obligations. She will uncover the truth behind the aging edifice for an epic article in the school newspaper.
But when her investigation reveals a connection between Connor and a tragedy long-since forgotten, Melinda has a choice: put off her junior year achievements to save a local landmark and a boy who constantly pushes her away or put them both out of her mind for good and focus on making the grade.

Goodreads / Amazon
—
EXCERPT:
My eyes land on the monstrous wall running the length of the block ahead of us. What was once red brick has now faded to ashy gray and tan, adorned with splotches of green lichen. To me, the Westerly Estate has always looked completely out of place in Harmony, like someone froze time and plunked a long-forgotten fairy tale castle in the center of mid-town Manhattan.
Becca’s renegade curls swat the side of my forehead when she turns away from Will. “I’m sure you’ve heard the story behind the Westerly wall.”
“Something about Old Man Westerly building it because he hated his daughter’s boyfriend?” The memory is fuzzy, but I recall my father telling me about the local legend when I was younger.
Will laughs. “Dude must have been a fun parent.”
Becca nods. Finally, they agree on something. “Judging by the state of the wall, the estate behind it must be a total wasteland. I wonder why the mayor doesn’t force whoever owns it now to fix it up.”
I straighten my spine, searching for tall stone turrets, perhaps the tower of London, or at least a mansion like Brian’s. Only the top floor of a tired-looking manor house with faded clapboard siding and a shingled roof pokes over the top of the brick barrier. In the distance, I spot a redwood barn and two corroded metal silos.
“Old man Westerly built the wall a long time ago—maybe the seventies,” Becca says. “According to the story my gran told me, he completely despised his daughter’s boyfriend.”
“Yeah, and I bet the wall was his bright idea to separate them,” Will cuts in.
“All that to keep out one guy?” I ask.
“He was probably her one true love.” Becca enhances the mood by fluttering her eyelashes faster than a crazed hummingbird’s wings. “Then, right after the wall was finished, the Westerly family moved away and sold the land. Apparently, there was some sort of accident.”
“So the place is cursed,” Will says.
“Supposedly haunted,” Becca adds.
Will huffs. “No one believes the ghost stuff. But whoever bought it made a bad investment. Must be a toxic-waste dump or something if you can’t build on it.”
The light switches to green. Will punches the gas, and Becca slams into me, her shoulder knocking mine.
“You’re out of control, Gamen,” Becca gripes. “Sorry, Mel.”
Two cars roll through the intersection before the light shines yellow and then red. Will swears under his breath. “First-day-of-school traffic. Everybody wants to show off their new wheels.”
“Do you really think there’s a ghost?” I turn to Becca.
“Of course there’s a ghost,” she says. “People see her all the time.”
“Like who?” Will asks, arching an eyebrow.
She shrugs. “Just people.”
“Name one person. Have you seen her?”
“No, Will,” she answers with a sigh. “But everyone knows about her, so the story must be true. She’s waiting for her true love to come back and rescue her.”
Will barks out a laugh. “True love. Right. More like a sex fiend.”
“Awesome. We’re talking about ghost sex now,” Becca says.
“I wonder what the real story is,” I say. “The truth could make a great headline for the paper. If I find out what really happened to the estate, maybe someone would clean the place up. I’m sure it was beautiful, back in the good old days.”
“Don’t you have enough to worry about this year?” Becca asks. “You can’t spend time researching a story like that. You’re assistant editor of Out of Tune. You’re on student council. You play basketball and run a whole bunch of other clubs. Our school would not exist without you.”
“You’re exaggerating.” My face flames.
The light flips to green, and Will floors the gas. As we pull away from the Westerly Estate, I glance at the second story of the old manor house. A shadowy profile appears in the left window. I blink, stare hard, and blink again. It’s gone. 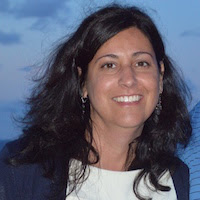 About the Author
Jennifer DiGiovanni is the author of the School Dayz Series. When she’s not writing or reading, she likes to try new sports and activities from archery to ballroom dancing, with varying degrees of success.
Website / Goodreads / Facebook / Twitter