Who doesn't love a man in uniform? 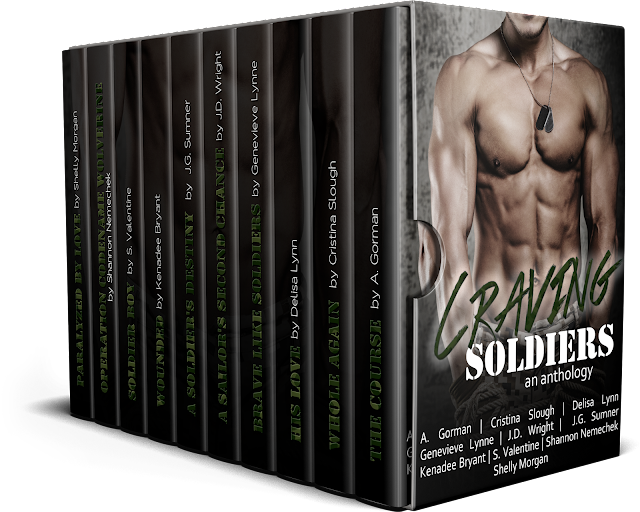 |Add to Your TBR|
Goodreads 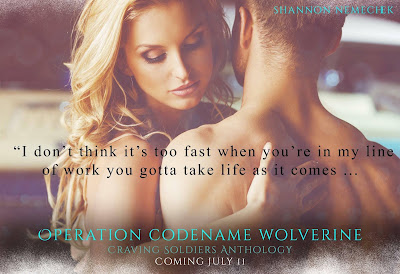 Are you bold enough to bite the bullet?
Soldiers have never been this enticing.
They demand our attention. The confidence they exude is undeniable.
Uniformed bad boys. Thrill-seekers who thrive on taking calculated risks, brave enough to face death without even blinking.
They are disciplined, focused, fearless, their absolute commitment to their country the proof of how strong they truly are.
These are the tales of the toughest men, the most resilient women, ready to fight for what they want—for what they believe in.
Craving Soldiers? Get ready to be blown away. 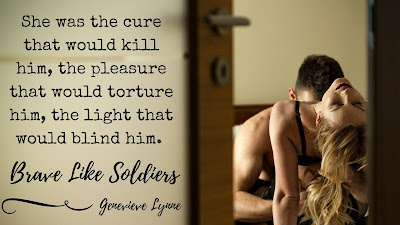 The bad has never felt so good, and the good has never been this tempting…

We all need it. We all crave it. The unexpected. The freedom of letting all your inhibitions go. It’s the thrill of being led to the edge, testing the limits, wondering if and when you’ll be pushed over. It’s the rush of the unknown. The bittersweet of tasting the forbidden when you know it’s undeniably bad for you. It consumes you, possesses you, and seduces you with its decadence, the desire for wickedly bad things.

Craving is a NEW series of anthologies of sinfully seductive bad boys and scandalously wild bad girls—all ready to ignite your deepest desires by letting you experience the daring side of romance.

So...What are you craving? 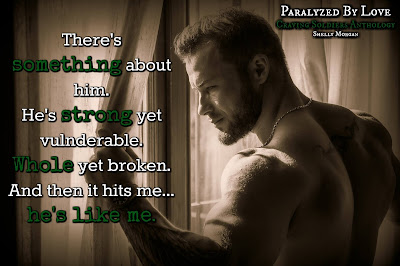 A. Gorman
A. Gorman was born and raised in small community in Central Indiana. She left the slow moving life of the country for the fast-paced city life after high school. After spending twelve years in the city and becoming a mother to two wild and crazy kids, she chose to move back to the peace and quiet of the country after marrying the man of her dreams and gaining three more children.
As an avid reader, A. never set out to be an author since she’s a full time editor for several incredible authors. However, after editing one day, a voice started talking to her and talking and talking. She decided to sit down and write what she had to say, and it turns out she had a lot to say. Then that one voice turned to two. And another story come to life. Not believing that anything she was writing was publishable, she asked a few friends to critique her manuscript…and now she’s the proud author of the Their Sins series, with several more series and standalones planned.
When she’s not corralling their five kids and two dogs or out in their garden, you can find her at her desk editing or writing her next novel with a cup of coffee and classical music cranked up on her iPad. While she loves reading, A. is addicted to all things British, coffee, and gummy bears—in no particular order.
Facebook: https://www.facebook.com/AGormanAuthor
Twitter: https://twitter.com/AuthorAGorman
Website: http://authoragorman.com/
Goodreads: https://www.goodreads.com/author/show/8185027.A_Gorman

Christina Slough
Novelist, movie addict, and animal lover, Cristina Slough is the author of: Till Death Us Do Part, her debut novel.
Cristina has always been a bookworm, rarely seen without a pen and paper in her hand, she loves delving into a literacy fictional world of her own.
At the age of 11, her junior school teacher told her mother that she would be wasting her life if she didn’t become an author. Throughout her teenage years and beyond, her parents spurred her on to keep writing. She later began a career in commercial real estate, working in London’s West End, a corporate bubble where she was unable to fuel her passion to write.
It was on her Californian honeymoon in 2012 that the bug to write was becoming increasingly difficult to ignore. After visiting Yosemite National Park she was inspired by the natural beauty of the land that surrounded her. Holding a special place in her heart, Yosemite would later be written into her debut novel.
She finally gave up the ‘big smoke’ when her son, Lucas, was born in October 2013.
When Lucas was a newborn, Cristina was told to sleep when the baby sleeps. She never could. There was a calling inside her to write. After getting to grips with her new role as a mother, she began working a psychological thriller, but she couldn’t fully connect to the characters she created. She ditched the manuscript and started Till Death Us Do Part (Limitless Publishing, 2015).
Cristina is married to Adam, who runs a successful business; together they share their Bedfordshire home with their son, crazy white German Shepherd and three spoiled cats. They can be found trekking through woodlands, or around the many shops Cristina loves to explore. As a family, they love to travel frequently, the United States being a firm favourite.
Facebook: https://m.facebook.com/cristinasloughauthor?ref=bookmarks
Twitter: https://twitter.com/cristina_slough

Delisa Lynn
Delisa Lynn grew up in Columbus Ohio, she is currently residing in Western New York with her husband and fur daughter Sophie. During the day she works as a Medical Assistant and at night, she types away on her laptop, allowing her characters to escape her mind. Pink is her favorite color, and she loves anything animal print. She loves traveling, shopping and baking. When Delisa isn’t working or writing you can catch her snuggled up with her kindle reading about her newest book boyfriend.
Facebook: http://www.facebook.com/authordelisalynn
Twitter: https://twitter.com/authordelisalyn
Website: http://www.authordelisalynn.com/
Goodreads: https://www.goodreads.com/AuthorDelisaLynn

Genevieve Lynne
Genevieve Lynne grew up in a small Texas town where everyone knew each other and gossip was considered a legitimate news source. She was raised on heaping helpings of southern cooking, sweet tea, hot summer nights at the lake and maternal guilt. Even after moving to Austin to pursue her bachelor’s degree in English at The University of Texas, she never could shake the small town out of her. She’s still working on the guilt thing.
Genevieve loves to incorporate the charm of close, crazy families and small-town life into her stories. She now lives in Fort Worth with her husband and three sons.
Facebook: https://www.facebook.com/GenevieveLynne.author/?ref=hl
Twitter: https://twitter.com/genevieve_lynne
Website: http://www.genevievelynne.com/
Goodreads: https://www.goodreads.com/user/show/4277629-genevieve-lynne

Kenadee Bryant
Currently lives in a small town called Mesquite, Nevada. She is going to college to be an English teacher and writes on the side. When she isn’t busy with school work or writing new books she likes to hang out with her family, do things outdoors, and read whatever she can get her hands on.
Facebook: https://www.facebook.com/kenadee.bryant
Twitter: https://twitter.com/kendoll350
Wattpad: https://www.wattpad.com/user/OutOfMyLimit17

J.D. Wright
J.D. Wright is a military wife, mother of four, and author of paranormal and fantasy romance books filled with strong-willed heroines, swoon-worthy heroes, and sprinkled with humor and adventure. J.D. creates artistry in many ways, as a baker and cake artist by day and author by night. You can usually find her typing away at the computer or covered in frosting.
Since discovering she has a knack for writing, J.D. has so far written and self-published eight books of the Everealm and Songs of Everealm Series and is now venturing into the world of paranormal with her new superhero-themed series. She is an avid reader and lover of all things romance so she always includes a good love story in her paranormal and fantasy novels.
Facebook: https://www.facebook.com/authorjdwright/
Twitter: https://twitter.com/everealmbyjdw
Website: http://www.authorjdwright.com/
Goodreads: https://www.goodreads.com/author/show/9327703.J_D_W_
Pinterest: https://www.pinterest.com/everealmbyjdw/

JG Sumner
JG Sumner was born and raised in Southern California, and went to Nursing School in San Diego, where she earned her RN. She then began working as an ICU nurse. While working full-time, she went back to school to earn her bachelor’s degree in Nursing as well as her master’s degree in Nursing at Cal State Dominguez Hills. Most recently, she worked as a supervisor in a major trauma center in the San Diego area. JG made the decision to leave her position at the end of 2012 to be at home with her three boys, dogs, and to pursue her writing career—a dream that was born long before she ever thought about being a nurse.
She loves snowboarding, traveling, reading, hiking, kickboxing, spending time with her family and her dogs, and pretty much anything outdoors.
JG has a very dry sense of humor, and should never be taken too seriously. She loves to hear from her fans and even those who aren't and would love to hear your opinion on her books.
She is also the author of A Shot in the Dark the prequel to Into the Light, and the Surrender Trilogy coming this summer.
I love to hear from my readers.
Facebook: https://www.facebook.com/JGSumner
Twitter: https://twitter.com/jg_sumner
Instagram: https://www.instagram.com/jgsumner2/
Goodreads: https://www.goodreads.com/user/show/63590751-jg-sumner
Website/Blog: www.JGSumner.com

S. Valentine
Valentine grew up in England. Studying English language and literature, as well as law, she worked in a solicitors for many years before moving to Spain. She does however still visit the UK, which in a way, will always be home.
Returning to her lifelong passion of writing books, she’s also a weekly columnist for The Ibizan newspaper on: lifestyle and fashion. Her other interests include reading, shopping and a nice glass of wine to shows such as Sons Of Anarchy, Dexter, Gossip Girl and SATC. She’s a social media addict, and loves connecting with new people.
For more information, please visit: www.s-valentine.wix.com/books. If you join her newsletter, you will be the first to receive sneak peeks of chapters, teasers, news, giveaway prizes and more!
Facebook: http://www.facebook.com/SophiaValentineAuthor
Twitter: http://www.twitter.com/SophiaVAuthor
Website: http://www.goodreads.com/SophiaValentine

Shannon Nemechek
Shannon started her writing career while still serving in the US Army. As an NCO in the Army she led and trained soldiers.
Shannon grew up in Macomb, IL where she graduated from High School in 1987 and soon after joined the US Army. Shannon served from 1987 to 2015 during Operation Desert Storm and during Operations in Iraq and Afghanistan.
In April 2015 Shannon retired from the US Army with 23 years of service as a Unit Supply Sergeant in several Army units overseas and the United States. She served as a US Army Recruiter for 4 years and she holds a degree in clinical psychology and has been awarded multiple awards during her Army service. She is a mother of 4 children and a grandma to 2 beautiful grand-daughters. She has been married 24 years to her husband, Ken. They reside in Staunton, IL a small town along Old Route 6.
Facebook: http://www.facebook.com/srnemechek
Twitter: www.twitter.com/srnemoauthor
Website/Newsletter: http://www.shannonnemechek.com
Amazon Author page: http://www.amazon.com/Shannon-Nemechek/e/B0179RK5N8/ref=dp_byline_cont_ebooks_1
BookBub: https://www.bookbub.com/authors/shannon-nemechek
Goodreads: https://www.goodreads.com/shannonnemechek
Readers Group Shannon’s Sinful Sirens: http://www.facebook.com/groups/603162766528399
Instagram: www.instagram.com/nemochick_1969

Shelly Morgan
I hope you all enjoyed this short story. And I hope that someday soon, I can bring you more of Enzo and Brook. And maybe her sexy rocker brother, too. ;)
Thank you for your support and for reading my work. This story was an idea I’ve had for a little while and only really came to life when I heard about this anthology. And even though I know I have other stories that I need to get out to you all, (soon, I promise) I’m so glad I was able to write this story. And hopefully, you all agree with me!
Be sure to check out my website below for more about my other books and to keep up-to-date on any new releases coming up.
Thanks again!
Facebook: www.facebook.com/AuthorShellyMorgan
Twitter: https://twitter.com/Shelly_Morgan34
Website: www.authorshellymorgan.com 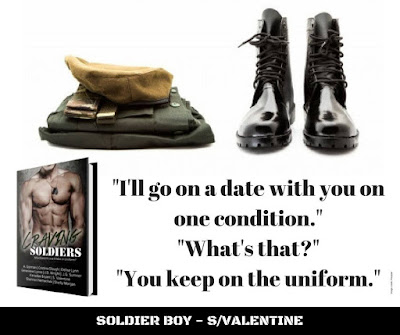 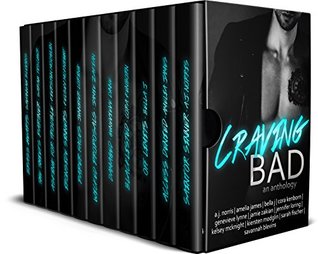