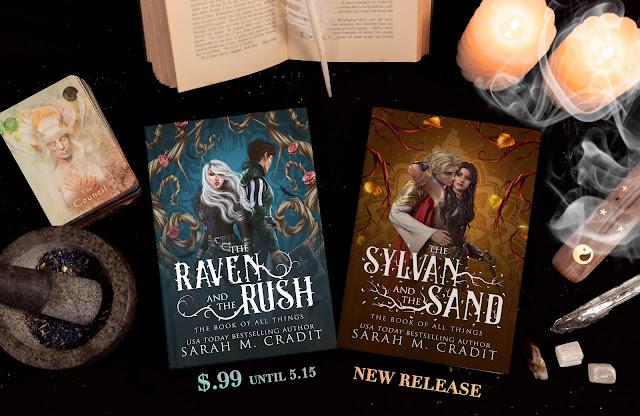 Hello, Haven Invaders! Today's post is super awesome! Come celebrate the release of
THE SYLVAN AND THE SAND by Sarah M. Cradit!
Also, grab THE RAVEN AND THE RUSH on sale!
Brief Disclaimer:
This post will include affiliate links, of which I do receive a small commission for sharing. This does not increase the price of the product. Additionally, I did receive an ARC of the book featured in today's post, but I purchased a copy as well. My reviews are short and sweet. I never re-summarize a book; the book's summary is already included. 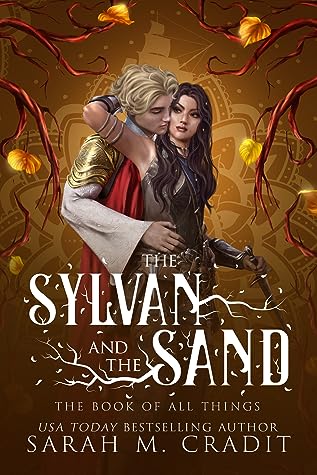 The Sylvan and the Sand

by
Sarah M. Cradit
Marry your enemy. Dare to survive.
From the USA Today Bestselling Author of Kingdom of the White Sea comes a new series of standalone fantasy romance tales set in the same vibrant world: The Book of All Things. Disappear into this scintillating tale of mortal enemies forced into a perilous, passionate marriage.
Yesenia Warwick artfully dodges her father’s talks of marriage, set on proving she is just as capable as her brothers. Her three loves—kin, homeland, and independence—are all she needs.
Corin Quinlanden suffers under the cruel contempt of his ruthless father and brother as they scheme and plot from their castle in the trees. He’s given up wishing for happiness. A strategic marriage, far from home, is as high as he dare dream.
But the king of this realm has his own plan.
Everything the gilded Quinlandens have “earned” was stolen from the Warwicks. So when all the leaders of the realm are summoned to a celebration with the king, both houses approach this fete balancing on a sharp blade’s edge.
But the king’s celebration quickly turns to horror. The lords and ladies can only watch, helpless, as the devious king masterminds a series of marriages between their children, spinning the kingdom into chaos.
Brash, fearless Yesenia Warwick is now the unwilling bride of tender-hearted Corin Quinlanden. Neither her silver-tongued wit, nor her unmatched skill with daggers, can erase what has been done.
The choice ahead of her is simple, but impossible.
Embrace her dangerous new life in the den of her enemy, or send the kingdom to war.
Links: Add on Goodreads | Amazon | Books2Read (All Retailers) 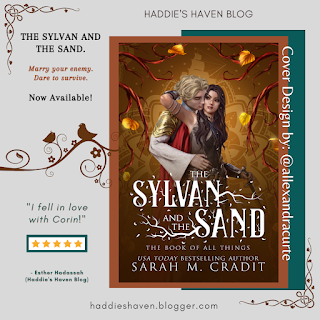 The Sylvan and the Sand by Sarah M. Cradit
My rating: 5 of 5 stars

"I Fell In Love With Corin!"

I have always loved Ms. Cradit's books. It's been a few years since I read any of her books, so I was very excited to read The Sylvan and the Sand!

Ms. Cradit's writing in this book was so beautiful and the story flow was amazing. While I am not a huge enemies-to-lovers fan, the right book will always find its way to my eReader and I truly loved the way this one turned out. Corin is probably my new favorite love-interest. The character/story art is brilliant!
(I have not yet read THE RAVEN AND THE RUSH, but I do own it and will start it ASAP!)
View all my reviews

The Raven and the Rush

(The Book of All Things #1)
Currently on SALE for only $0.99 cents!
Links: Add on Goodreads | Amazon | Books2Read (All Retailers)
One raven. One boy. One destiny.
From the USA Today and International Bestselling Author of Kingdom of the White Sea comes a new series set in the same vibrant world: The Book of All Things. Escape into this story of destiny and forbidden love weaving together a fate bigger than man, bigger than magic.
Evrathedyn Blackrook whiles his days away at university, blissfully oblivious to the horrors afflicting his homeland. He escapes into dusty books, content as a second son.
Rhosynora Ravenwood spends her sleepless nights fantasizing of ways to escape her icy, suffocating dynasty. To flee her birthright is to invite a traitor’s penance. To stay is another kind of death.
But time and fate have a way of mending all mistakes.
Evra soon finds himself the new Lord Blackrook. His inheritance is a plague-ridden land, the pyres from his late father’s campaign against magic still smoldering.
His realm’s future in the balance, he travels beyond his borders to a remote northern hamlet, where he meets Rhosyn. The spark between them is immediate; the suspicion even stronger. In Rhosyn, Evra sees her rare magic as the perfect answer to his troubles. In Evra, Rhosyn sees everything wrong with the depraved world of men.
But Evra is out of options. And Rhosyn is out of time.
As they resist the undeniable, forbidden bond growing between them, Evra’s dawning horror of Rhosyn’s fate brings him to an impossible choice.
Posted by Esther Hadassah at 5/10/2022 09:30:00 AM