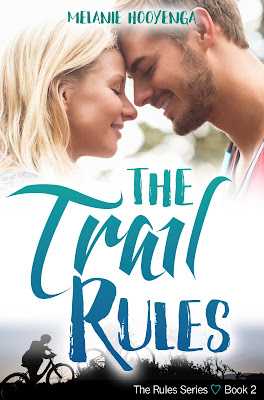 The Trail Rules
(The Rules Series #2)

Junior year’s looking up for sixteen-year old Mike. Her new BFF isn’t a sadistic control freak, her boyfriend adores her, and she’s learning to bike in the mountains without decapitating herself on a tree.

When she meets a group of riders who welcome her into their pack, she feels like she’s finally found where she belongs. One particular rider—a boy with an amazing smile and an even more amazing ability to see what she’s truly capable of—gives her the confidence to go after what she wants: her own life with her own rules.

There’s only one problem—he’s not her boyfriend.

Just as things seem to be falling into place, her parents put on the pressure to figure out her future—one that doesn’t include riding. Mike soon realizes that having everything isn’t that great when she’s not the one choosing it. She needs to decide if she’s going to continue to be a follower or step out of the shadows and find her own trail. 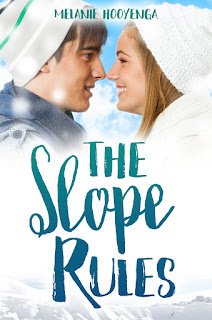 The Slope Rules (The Rules series #1) on Goodreads
AMAZON 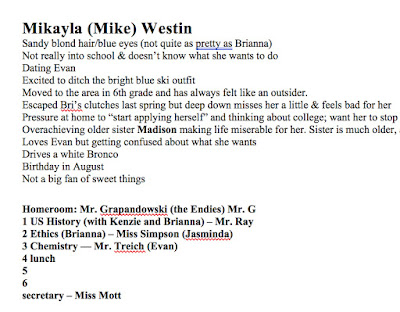 I’ve written eight novels and the idea for all but one of them started with me thinking, “Ooh, what if there’s this girl who….” (the eighth is about a boy so I thought, “what if there’s this boy…”). I take that spark of an idea, let it germinate in my mind for days or weeks, then form a story around that initial idea.
As my characters come to life, I track every little detail in a word document, and I continue adding to it as I write the story. If they off-handedly comment that their favorite breakfast food is oatmeal, it gets added to the list. But the one thing I don’t spend much time on is their physical appearance. I briefly cover hair and eye color, maybe make references to their height and body size, and might possibly mention a favorite piece of clothing—otherwise I leave it up to the reader to fill in the gaps.
As a reader, I hate it when writers describe every last detail of how a character looks, especially in the love interest. We all prefer something different, and if you give that character a color hair that isn’t my preference, I mentally change it to what I want. Which means if they keep mentioning the ACTUAL hair color, it’s very jarring. (Yes, I recognize this is a personal problem.) Because of this, I leave the descriptions to a minimum and let my readers’ imaginations do the rest.
(An unexpected side effect of this is I once polled my readers to ask who they imagined a certain character looked like, and a surprising number of them said they pictured her looking like me. Even though she’s got long dark hair.)
The downside of this is I don’t create Pinterest boards with my dream casts, and I can’t swap tales of which actor would be PERFECT to play Cally or Mike. The one time I created a board for my book Flicker, I chose one of the Jonas brothers and Selena Gomez, and within a couple years they became far too old to play teenagers. It can also make it tough to choose covers because I only have a vague idea of my characters’ faces while writing. When I found the cover for The Slope Rules, I gasped because THAT’S WHAT THEY LOOK LIKE! (Yes, I design my own covers.)
Have I been tempted to troll the internet for celebrities who look like my characters? Sure. But I’d rather spend time creating characters with depth and focus on what makes them tick, and leave the rest to you, the reader. 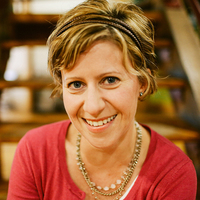 About the Author
While not a fan of matching Day-Glo outfits, Melanie’s been skiing since she was five and always points her tips up while exiting the chairlift. She lives in the land of lake effect snow—also known as west Michigan—with her husband Jeremy and Miniature Schnauzer Owen, and is always looking for ways to enjoy the outdoors. This novel, her fourth, inspired her to purchase her first helmet.