Haven Invaders! I am really excited to share this new release with you! Keep reading for a special excerpt from Brielle D. Porter's new release, JESTER, and a giveaway! 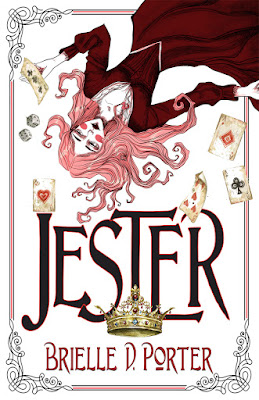 What happens in Oasis, stays in Oasis.

Lisette’s father killed the King. His execution leaves Lisette alone, disgraced, and without the magic he intended to pass on to her. In Oasis, that’s a problem. Glutted with enchanted performers, Oasis is a sin city where courtiers pay in gold to drink, gamble, and above all, be entertained. To survive on its competitive streets, Lisette peddles paltry illusions in place of magic.

Desperate to prove herself, Lisette enters into a deadly competition to be chosen as the highest-ranked magician in the world, the Queen’s Jester. But her rival, the irritatingly handsome Luc, possesses the one thing Lisette does not—real magic. Lisette will do anything to win, but when evidence implicating the Queen in her husband’s murder surfaces, Lisette must choose between redeeming her family name, or seizing the fame she’s hungered for her entire life.

A group of tourists has gathered to watch me throw knives at a shopboy. They’ve come here for magic; I’ve kept them here with misdirection and lies. Maybe it’s not magic exactly, but it is undeniably entertaining watching my unwilling assistant flinch every time the knife point gets too close to his groin.

I hold the knife steady, aiming, watching his limp hair flop as the wooden wheel he’s strapped to slowly rotates.

Stefan lets out a whimper, and I toss him a smile. He was a lot braver in the shop where I’d found him, flirting as he bagged my books. It hadn’t been hard to trick him into volunteering.

“Throw three at once!”

The nighttime crowd is always hungrier for violence. I hold up my hands placatingly.

“Obviously, I can’t throw three knives at once. That would be dangerous and highly irresponsible…”

There are a couple of groans, but my reputation must precede me, because there are a few whoops and chuckles thrown in as well. With a sweep, I pull my deadliest knife from my belt, the one with the wicked serrated edge, brandishing it for the crowd.

“But I think we can spice things up a bit!”

I stab the knife into a vat of oil, the shimmering liquid sliding down the tang of the blade. Then, with a flourish, I sweep it through a nearby torch. Flame devours the knife. The crowd roars its approval. Stefan pales.

The hilt burns in my hand, throwing off sparks, as I wonder if perhaps I’ve gone too far. I’ve only tried this a few times. And the jackrabbit I had caught to practice with wasn’t even good to eat after, blackened to an inedible crisp.

Either way, I’ll give them a show.

Brielle D. Porter decided to become a writer after a well-meaning elementary school teacher told her she had a gift for it. Stolen moments under the covers reading anything from Harry Potter to William Goldman solidified the desire to tell stories herself one day. Jester is her debut novel.

Brielle lives with her husband and three sons on a lavender farm in Northern Idaho. When she’s not writing, she can be found running and beekeeping. Only ask her about her hobbies if you have plenty of time to spare.