A COVER REVEAL TOO GOOD TO LEAVE IN THE SHADOWS!!

I am so pleased to take part in the reveal of this amazing cover from Elise Kova! I haven't been sharing extra posts to my blog in a while, and that's mostly because I just haven't had enough internet time. {I have been doing everything with a hotspot and it runs out really fast with certain sites. :( } But this was too good not to share and I am so excited for the release of this amazing series conclusion! 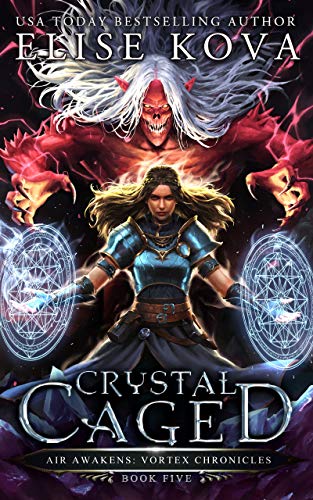 The highly anticipated and breathtaking finale of Air Awakens: Vortex Chronicles by USA Today bestselling author Elise Kova.
One way or another... she will be the end of the world.
With powers that weren't supposed to be touched by mortal hands, Vi Solaris is determined to free herself and the world from the deadly vortex it's trapped in. This mission has taken her to forbidden lands and has transformed her from a sheltered princess to a fearsome warrior.
But the ultimate triumph requires the ultimate sacrifice, forcing Vi to choose between the last tethers to her humanity and the very people she's sworn to protect.
Vi's story of magic, sacrifice, triumph, and love reaches its epic conclusion in Crystal Caged.
Air Awakens: Vortex Chronicles should be read in order:
Vortex Visions
Chosen Champion
Failed Future
Sovereign Sacrifice
Crystal Caged