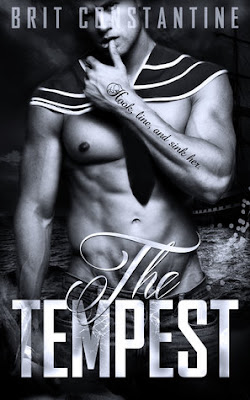 They call him “The Tempest.”


He despises the fame and glory, but it’s nothing compared to the hate he inflicts on himself. All he wants is to be left alone to live on his boat in misery.


When I line up for his autograph, it’s instant fireworks. But not the beautiful stars-shine-bright kind. He’s rude. Heartless. A ticking time bomb of rage.


Luckily, I’m not afraid to put a lit match to his fuse.


I upload a private video of him to my one-million-subscribers channel. The video goes viral.


The ex-Royal Marine nearly breaks down my studio door to flag me inappropriate…
…while I’m in the middle of a live streaming event.
I don’t tell him. I don’t switch off the camera. I keep recording, secretly playing to my audience. He should have checked if the camera was rolling, right?

It should be a shipwreck from the moment the storm hits.


Our attraction is painful, undeniable, and it’s like I am Eve and his lips are the apple, and damn if his tongue isn’t the snake.


I am the only girl who can put this broken man back together again.


But he knows the secret he is keeping will tear us apart. He knows it’ll force my hand to break ties with the only family I have left in the world.


But once The Tempest, the man with the iron heart, falls in love … he’ll crush anyone who dares to take me away from him.


I have no choice but to go down with his ship.
Hook, line, and goddamned sinker.


The Tempest is a contemporary romance story of love, comedy and treachery.

The Tempest by Brit Constantine
My rating: 4 of 5 stars

DISCLAIMER: I received an ARC of this book for honest review, and as part of a blog tour with Xpresso Book Tours. Also, totally did not need to read this for a while, but finished it in a few days considering I had no internet for a week.

Prepare to have your sock yanked off. The Tempest is different. It is very erotica romance. There are innuendos in every other sentence. At times, I felt like that is all the characters did. They did it, talked about it. 50% is the story, and the other 50% is the sex. I wonder if the author had a bit of confusion for what the main focal point is for the book and the ending result was a line right down the middle. Don’t get me wrong. I enjoy that detail in a book. But sometimes, it feels like an over-kill.

This aside, I really did like following Lenic and Felicity’s story. I like how Felicity is a vlogger and we get into her head a bit when she sees an opportunity for a video. Felicity’s character resonates with me when she opens up to Lenic about her aunt verbally abusing her and how no one stepped in to put an end to it. The friendship/bond she has with West. How she looks to him as that protective brother figure. I like how the story goes beyond the viral video of Lenic in the shower. I was bit confused at first with the chapter titles, because the author quotes the characters. The book starts in Lenic’s perspective, in the prologue, but then the entire book follows Felicity’s perspective. I thought it was switching back and forth because the chapter headings had the characters’ name beneath the quote, but I caught on eventually. Lenic’s perspective does come back later on in the book, and I like how he is portrayed. I am not too keen on the constant use of F-bombs. But I managed to overlook those details and I remained focused on knowing the story, learning more about the characters.

Brit Constantine is a twenty-something author of The Tempest, her first published novel. Writing and ballet are the two things she lives for … next to cheesecake and firemen. When she’s not writing, or randomly bidding for useless items on the Web, she’s either earning bruises at her boyfriend’s mixed martial arts club or sipping on a perfect glass of Pimm’s with her girlfriends. She lives in London with her ever-growing collection of shoes. It’s a woman’s right to shoes.
Goodreads | Facebook | Twitter