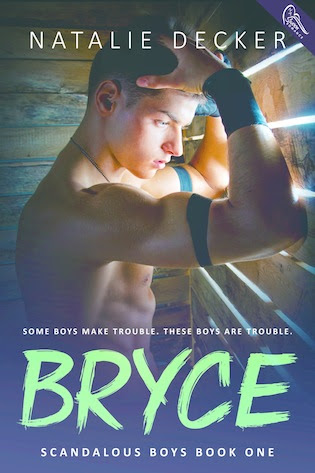 
Bryce Matthews doesn’t do the whole nice boyfriend thing. Chocolates and flowers—girls can forget all that. And he certainly doesn’t care about the gossip and rumors that follow him at school and around town. If anything, the talk amuses him. Bryce isn’t lacking in confidence. He knows himself and he knows his limits.
One of those hard limits is Madison Issac. Bryce can never have her, and he’s perfectly fine with that. Sometimes the fantasy is better than the reality anyway.
Madison Issac thought she was a pretty good judge of character. But she’s surprised at how gentle and comforting resident bad-boy and next-door neighbor Bryce Matthews is when we finds her crying in the park.
Maybe there’s more to Bryce than people think? So Madison begins to wonder.
Can a guy like Bryce ever change his ways?
Can a girl like Madison really be into a guy like Bryce?
With hearts and reputations on the line, this kind of love can be scandalous.

I’m on the verge of blowing up again and need to escape. I run from my room, but it’s not far enough, so I leave the house. Once my feet hit the paved road, I sprint. Where am I going? I don’t know. I could run my usual route that I do every morning. Of course, I’ve got on the wrong shoes and don’t actually want blisters on my feet, so maybe not. I just need to get out of this place.
At the park about a mile from my house, I slump down on a bench and let go. Tears fall—hard, snotty sobs. Oh yeah, I let it all out. Heaving deep breaths, I soak the palms of my hands with my sorrow. No one is here, so I’m not worried about anyone seeing me. Definitely not worried about anyone asking me what’s wrong.
At least that’s what I think until I hear someone clear their throat nearby. I jerk my head up and look around. Bryce is puffing on a cigarette.
“Damn, Smalls, who died?”
“No one! Go away!”
He looks around and laughs. “Not happening. This is public property. I’m allowed to be here as much as you are.” He takes another drag on his cig, and I glare at him. I don’t want him seeing me like this.
“You know those things kill people.” I point to the cancer stick.
“Really? I thought they increased your life span.”
I know he’s joking, but I don’t find it funny. “I like living. You might not enjoy it so much, but I don’t want to breathe that crap in. So put it out or take a hike.”
He throws up his hands and drops his cig to the ground, then grinds it out with his shoe. “Better?”
“Much.”
Bryce takes a seat beside me and looks up. Evening is settling, turning the blue Tennessee sky into an orange and pinkish wonder. “So … why are you out here? The park is usually my domain.”
“I just needed to get some air. My house became too much.” I shrug. It’s an honest answer. Not the full answer, but I’m not spilling my guts to Bryce.
He nods.
We sit in silence for a few more minutes, and then I stand up. I need to get away from this bench, and him too. He looks me over and then shakes his head while his dark eyes look down at the ground. He chuckles.
“What?”
“Nothing.”
“No. What’s so funny?” I demand.
He meets my gaze. “You. Well, all good girls are the same. Always running from the criminal as soon as they can. You owe me a cigarette.”
“I don’t owe you anything!”
He laughs louder. “Jeez, Smalls. Couldn’t even deny running away from me. Wow. Just wow.”
“I’m not running away.” I fold my arms over my chest and snarl, “I need to get back home.”
“Yeah. Whatever you need to tell yourself.” He waves, and I leave him.
Stupid Bryce. Why do I care what he thinks anyway? I don’t. Why couldn’t he just let me cry?
Footsteps fall close behind me, and I make the mistake of looking over my shoulder. Bryce is right there. “It’s getting dark, Smalls.”
“And?”
He sighs. “I’m being a gentleman and making sure you get home okay. All right?”
“I can get home by myself.”

About the Author
Natalie Decker is the author of RIVAL LOVE series. She loves oceans, sunsets, sand between her toes, and carefree days. Her imagination is always going, which some find odd. But she believes in seeing the world in a different light at all times. Her first passion for writing started at age twelve when she had to write a poem for English class. However, seventh grade wasn't her favorite time and books were her source of comfort. She took all college prep classes in High school, and attended the University of Akron. Although she studied Mathematics she never lost her passion for writing or her comfort in books. She's a mean cook in the kitchen, loves her family and friends and her awesome dog infinity times infinity. If she's not writing, reading, traveling, hanging out with her family and friends, then she's off having an adventure. Because Natalie believes in a saying: Your life is your own journey, so make it amazing!