#Review: One Summer With Autumn by Julie Reece | #Giveaway @SwoonRomance 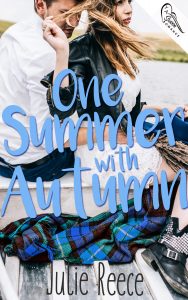 One Summer
with Autumn
by Julie Reece

Wearing anger management issues like a second skin won’t help Autumn win her dad’s approval for the big trip she’s been planning—or meet his condition that she successfully complete a summer internship for college.

Autumn’s cool unravels when her sister lectures against disappointing the family again. And when a young, bearded guy steps through the crowd to settle the growing argument between siblings, Autumn lashes out, dubbing him a “Duck Dynasty wannabe.”

At Nineteen, Caden Behr is clueless as to why his man parts are threatened by the fearsome girl before him. He'd only come to find an intern for his recreational equipment company, not break up a girl-fight between two sisters.

Unfortunately, the only candidate left is the girl who just told him off. Without her, he’ll never prove to his CEO mother that he’s ready for more responsibility.

Because despite her best efforts to scare him off, and his fading desire to push her into the lake, they’re beginning to enjoy the time they spend together. But pride is a hard habit to break. And if neither will admit their changing feelings, they could lose a whole lot more than one summer.

DISCLAIMER: I received a copy of this book for this tour.

This book is so cute! Autumn is  . . . the word is on the tip of my tongue, but I can't say it. She is very headstrong, definitely. Her character is not wishy-washy. And she's very realistic. Like "there's a Mother of all Spiders in that bathroom" realistic.

Caden (or Silas, as he makes Autumn believe his name is) is one heck of a clever cookie. He has something to prove. He also wants to teach Autumn a lesson. He's got the cocky thing going on, but mainly for Autumn's benefit because he's not going to go easy on her. He is a bit snarky, too, but its sublte. Both characters feel that they have something to prove to a parent. A brilliant match, if you ask me.

I really like how it shares a message of pushing aside your wrongs and working at making things right. ♥

My Rating: 4.5 of 5 Stars.
I have to say that I was in a bit of a grumpy mood when I picked up this book. However, my mood did a major 360 and totally lifted upon reading the first chapters. Its light and fluffy, hilariously up my alley. Check out the excerpt below!

About the Author
As a child, Julie’s summers were about horseback riding and fishing, while winter brought sledding and ice-skating on frozen ponds. Most of life was magical, but not all. She struggled with multiple learning disabilities, and spent much of her time gazing out windows and daydreaming. In the fourth grade (with the help of one very nice teacher) she fought dyslexia for her right to read and won.

Afterward, she invented stories where powerful heroines kicked bad-guy butt to win the hearts charismatic heroes. And then she wrote one down…
Writing ever since, Julie weaves southern gothic, contemporary, fantasy, and young adult romances. She enjoys sweeping tales of mystery and epic adventure… which must include a really hot guy. Her writing is proof a dream and some hard work can overcome any obstacle.

For a split second, I wonder if Silas followed me out here. Not that he should. Why would he? It’s just, since that day, the drowning day, he’s been different—starting with all those gifts. Unlike some families, Syd and I don’t receive presents on birthdays. Dad’s not religious like mom was, and we don’t celebrate holidays. We itemize what we need versus what we want and Dad considers those requests. Within limits, of course. Listed items may (or may not) be granted based on a points system. Earned for grades, chores, behavior, goals met, stuff like that. So when Silas started tossing out prizes, I was almost giddy.
Also, I don’t use the term giddy.
Yeah, I know they weren’t really presents, they’re freebies from a multimillion dollar company and I’m being paid to review their products, but it’s the way I got them—the excited look on Silas’s face as he launched them at me. I was silly and girly, and he responded with teasing and sexy smirking. We were goofing off and having fun, and for a minute, the pair of us acted more like friends than enemy coworkers.
And it was nice.
Now I usually reserve that insipid word for things like chicken broth or vanilla ice cream, but this is one of those rare occasions where nice does not mean mediocre or generic. On that day, nice meant comfortable in its lack of anger, or contrived-ness, or rules. Nice had a sweet, mellow, longed-for-and-rarely-attained contentment.
Later, when I was stupid enough to half drown myself in the lake, Silas had been so … cool. I was never really in danger, I mean, sure my boots were too heavy, but Gus was right there, and so was Silas. I was making it back to the boat just fine on my own. Except I wasn’t. And Silas knew it. He helped me, got me to safety, and then he held me. He didn’t have to, but he did. Which was way more than simply “nice.”
He lifted me, and the next thing I knew I was all wrapped up in his strong, comforting arms. I pretended he cared. His touch was so tender and careful. He made it easy to believe I was important. That he wasn’t just doing his job. For a few sweet minutes, it felt like I mattered to someone. To him.
I blow out a hot breath. Pathetic. He made it clear he doesn’t date employees. And I shouldn’t want that even if he would. The guy was more interested in the pom-pom car washing action across the street on that first day than in me, anyway. I’m nothing more than to him than a paycheck.
What was it he’d said? Trust me, Teslow, if I wanted you, you’d know it. His words gave me chills. His stormy, blue eyes drilled a path straight to my core when he’d said that. Not on his best day had Alex affected me so profoundly. Silas had my full attention, and I’d wanted to know, in that moment, what being wanted by Silas Reeves would feel like.

Win an eBook copy of One Summer with Autumn and a $5 Amazon gift card.
a Rafflecopter giveaway